Here’s the latest information on a wonderful time of year to visit.

For a Limited Time Only! Disney Parks Rolls Out the Unexpected with Weekly Surprises, Delights for a Little Extra Magic

Guests will find an extra sprinkle of pixie dust each week when they visit Walt Disney World and Disneyland resorts in 2013.

While 2013 is already a momentous year for Disney Parks – with New Fantasyland as the largest expansion in Magic Kingdom history at Walt Disney World Resort and the first full year of a reimagined Disney California Adventure at Disneyland Resort – Disney launches Limited Time Magic: 52 weeks of magical experiences big and small that appear, then disappear as the next special surprise debuts.

Imagine an Independence Day celebration – only it lasts an entire week….Main Street mainstays the Dapper Dans rocking out with boy band hits in barbershop style….a Friday the 13th dance party with Disney villains that lasts to the 13th hour….a Valentine’s Day in 2013 that becomes Valentine’s Week with Disney castles blushing pink, surprise meet-and-greets with Disney princes and princesses, and candlelit dinners for couples in love.

These and many more special experiences to surprise and delight Disney Parks guests will roll out each week in 2013. Unique, magical, memory-filled – and each for a limited time only.

Disney officials noted that Limited Time Magic was inspired by the reality that many of life’s most cherished memories are made during those special, but fleeting moments when families spend time together with shared experiences.

The experience of the week will be announced in a variety of ways including in-park, Disneyworld.com, Disneyland.com, Facebook, Twitter, the Disney Parks Blog – adding to the element of surprise.

Early 2013 guests will be greeted by New Fantasyland, which grand opened Dec. 6, 2012 at Magic Kingdom. More fantasy is on the horizon. 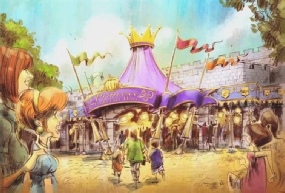 here’s even more in store as the expansion of New Fantasyland continues:

The new year revs up with a re-imagined, design-centric Test Track Presented by Chevrolet which grand opened Dec. 6, 2012 with a sleek new “Chevrolet Design Center.” Amid upbeat music, engaging media, dramatic lighting and a collection of Chevrolet concept cars and model vehicles, guests themselves become automotive designers and create their own custom concept vehicles.

The adventure then shifts into high gear as guests buckle into their 6-person “SimCar” ride vehicle and put their design through its paces on the exhilarating hills, switchbacks and straight-aways of the Test Track circuit. Their performance testing complete, guests move into a post-show area filled with more interactive fun.

The new menu, created by Chef Francesco Santin who worked with Chef Bocuse in his restaurant in Lyon for 15 years, is built on the Bocuse tradition of French classical cuisine with fresh ingredients. For instance, a classic Bocuse fish entrée prepared in France with rouget (red mullet) is re-imagined at Monsieur Paul with red snapper from Florida.

Monsieur Paul is open seven days a week for dinner beginning at 5:30 p.m. Call 407-WDWDINE, or online at http://disneyworld.disney.go.com/reservations/dining/

The Kinsey Collection Opens at Epcot in 2013

LAKE BUENA VISTA, Fla. — The African-American story of determination, courage, hope, struggle and inspiration will be told through more than 40 pieces of art, artifacts, books, sculptures and documents on display at the Walt Disney World Resort. Previews begin in late February and the official opening will take place March 9, 2013.

At Epcot, the American Adventure pavilion will be home to the Kinsey’s personal treasures of African-American art and history, amassed from their travels to 90 countries and dating back to the 17th century.

The Kinsey Collection is the intersection where art and history meet, a virtual history book opened wide, giving voice to untold stories of accomplishment and contribution. The Kinsey Collection, at the American Heritage Gallery, will be included in Epcot admission.

LAKE BUENA VISTA, Fla. – The age-old image of bowling is updated with the new Splitsville, America’s Bowling Alley, at Downtown Disney West Side.

Placing a whole new spin on the bowling experience with its emphasis on unique design, Splitsville greets guests with upscale sushi bars, plush booths and dynamic decor overlooking the bowling lanes. Between strikes and spares, guests can feast on menu items including hand-tossed pizza, fresh-rolled sushi, grilled mahi-mahi with “Voodoo” shrimp and hand-cut filets alongside alley classics such as cheeseburgers and crinkle-cut fries served right at the lane.

Splitsville at Downtown Disney is the Orlando-based chain’s fifth location joining venues in Tampa and Miami, Fla., Fairview, Texas and Fredericksburg, Va. The expansion to Downtown Disney comes amid a growth era for the sport of bowling, which is the most popular participation sport in America with nearly 70 million people participating in the sport each year, according to the Bowling Proprietors’ Association of America.

LA soothing escape to a world of pampering and relaxation is just steps away from Disney theme park fun at the newly re-imagined Senses – A Disney Spa at Disney’s Grand Floridian Resort.

All the senses are engaged in an ultimate relaxation experience – flavorful and soothing elixirs, color variations in lighting and Disney orchestral music harmonize with the treatment selected. Spa-goers walk through the new Victorian-style entryway and indulge in the spa’s relax, renew, or imagine themes aimed at creating a custom experience.

Guests can book a spa appointment at the new Senses – A Disney Spa at Disney’s Grand Floridian Resort by calling 407-WDW-SPAS (407-939-7727) or learn more by visiting www.disneyworld.com/spas

A record field of more than 65,000 runners, including more than 25,000 for the marathon alone, are lined up to run in various races during this 20th anniversary Walt Disney World Marathon Weekend presented by Cigna on Jan. 10-13, making this the largest marathon festival weekend in America. Unique features await the marathon runners – a new Mickey Mouse medal, enhanced entertainment along Mile 20 to commemorate the 20thanniversary, a post-race party at Downtown Disney, some new course twists (the 26.2-mile route goes through the Walt Disney World Speedway and Champion Stadium) and the chance to run with several well-known running legends and celebrities (e.g. Drew Carey, Gilles Marini, Joey Fatone, etc.). For more info, go to runDisney.com

The Braves, who earned a National League Wild Card berth in 2012, report to the complex for two weeks of training in early February, before opening at Champion Stadium on Feb. 22 against the Detroit Tigers.

Individual game tickets for the Braves’ home spring training season are on sale through Ticketmaster (800/745-3000 and ticketmaster.com) and at the sports complex box office.

Information on the Braves’ spring training season, group tickets and mini-packs is available by calling 407/939-GAME (4263) and online at www.espnwwos.com/atlantabraves.