For the last few years, multitouch has been a huge part of modern technology. While Apple may claim the technology is theirs, it existed well before the emergence of the iPhone – but that’s a different story for a different day. Multitouch technology has undoubtedly changed touch interaction with electronic devices. It’s been such a hit that it’s migrated from its most popular environment (mobile devices) to personal computers (albeit through Windows, OS X, or Linux machines). 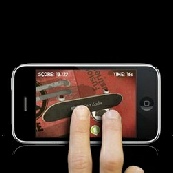 One reason multitouch has taken off is that it does feel like a more natural way to interact with a touch screen. Try going back and forth between a device that features multitouch and one that doesn’t. I think you’ll find the multitouch device far easier to use. But there is one thing that every touch screen device has in common: you’re going to touching a smooth, flat surface. This is one reason some people prefer to have a hardware keyboard (a keyboard with physical buttons) rather than use a software keyboard (a keyboard on a touch screen). It does take some getting used to when you can’t feel your way between buttons.

This is a problem that Disney Research is working to solve, and they have an intriguing solution. It’s called TeslaTouch, and it could bring a new dimension to that boring old glass screen of yours. In this edition of DizTech, we’re going to look at this amazing new technology.

This is hard to explain in anything less than techie jargon. Anything that makes a smooth glass surface feel like something else is never easy to explain. So stick with me for a little bit.

Do you have or have you ever used a touch screen device that has some type of feedback built in? The most common example would be a phone that vibrates a little bit so you can “feel” button presses on the screen. RIM released their Blackberry Storm a few years ago that had a weird screen thing going on where the screen itself was like a large button. TeslaTouch operates along this same principal, except that this goes to a whole new level. 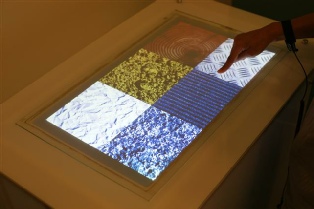 Instead of giving you vibration-style feedback when you touch something on the screen, TeslaTouch gives you a different sensation depending upon what you touch on the screen. For example, if you're using an on-screen keyboard you will be able to feel the keys and feel space in between the keys - even though you're still touching a smooth glass screen. Or, if you're supposed to be feeling a rough surface (like sandpaper), the screen will feel rough and scratchy. One idea Disney Research had was to make larger files feel heavier than smaller ones. If you have a large video file you want to move, it will feel heavier to the touch than say a Word document would.

How does it work? It's complicated, believe me. We have to get into positive and negative charges to explain most of this, and I didn't like physics in high school. So let's learn together! On a TeslaTouch screen, you still have the glass screen, but it's actually covered by two thin layers - almost like two screen protectors stuck on top of each other. Directly on top of the glass plate is a transparent electrode, which is covered by an insulator. To make this as simple as possible, the electrode sends electronic signals up through the insulator, which the signals changing based upon what is displayed on the screen. When your finger touches the insulator, the different electrical signals create different sensations in your finger by creating different types of friction. A lot of our sense of touch is dictated by friction, so by creating friction through electricity TesalTouch tricks your brain into thinking it's feeling a certain type of surface.

Don't worry, though. They're not planning on having electricity juicing through your extremities. The effect is more like a vibration or buzz, but the dif

ference in frequency and vibration create different sensations. Says Disney researcher and Ph.D. student at Carnegie Mellon University in Pittsburgh (go Steelers!), "It's kind of like a buzzing or a vibration. It has the same effect as a buzz, but if you carefully tune the frequency and the vibration of the panel you can actually create things that feel like sandpaper or rubber or a wall."

Where Can You See TeslaTouch in Action?

Nowhere yet, and probably nowhere for a while. Disney Research has created working units, but the thing isn't in production yet. There are a few scenarios that I think would be likely. These are purely my opinion, so take it with a grain of salt!

First, I think Apple's products are an obvious goal. With all the corporate ties between Disney and Apple, it'd be insane not to bring it to Apple's mobile devices. We're talking new iPhones, iPod Touches, iPads - even the iPod Nano is now a candidate for something like this (although it's probably not a likely candidate). With Apple's release schedule, though, we're probably at least a year and a half from seeing anything like this in any device. The iPad is probably the next device up for an update, seeing as how it was released in April. The next iPhone wouldn't be due until about June, and the iPod line doesn't get updated until fall. So, the soonest any device would have a TeslaTouch screen is April, and I just think that's too quick. June is possible, but still seems a little soon. I doubt they would update the iPod line with something like this before anything else, so I'm thinking the earliest would be the 2012 revision of the iPad. Again, just speculation, but I think the logic is sound. What do you think, Mr. Spock?

But what if the consumer market isn't the first place we see TeslaTouch in the wild? Disney has a few shy of a million ways to bring this into the world. What if we saw something like this in Disney Parks? It's not out of the question. Disney is working on things like interactive queues, complete with games. How cool would it be to see a TeslaTouch screen on an interactive screen while standing in line? Swap out those screens in Space Mountain and Soarin' for some TeslaTouch action! Also, let's not forget Innoventions in Epcot. This would be perfect there. I know it's all blue sky, but there are a lot of possibilities for something like this in Disney Parks.

Until then, though, I'm afraid we're stuck with just a few articles, a research paper, and a video to satisfy that craving for more realistic touch interaction. I've included a couple links to get you started. The first is a CNN article about TeslaTouch. The second is the official TeslaTouch web site. If you're in for some heavy reading tonight, check out some of the writing on there. It's deep - I'm warning you.

Also, be sure to check out their video that shows off how the technology works. Seeing it in action should make it even more interesting for you. 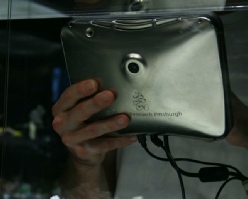 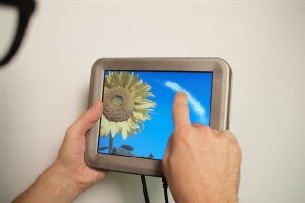