Walt Disney first made his name by changing what was “normal” in animation. Synchronized sound, color, feature length animation, CinemaScope widescreen animation – all of these are innovations Walt brought to his field. But we’re not going to talk about any of those this time around.

Disney was also involved in another technological advancement that changed how audiences saw a piece of animation. In this installment of DizTech, we’re going to look at the multiplane camera. Today when we talk about adding depth to film, we most likely are talking about 3D. The multiplane camera however, added depth to animation in a different way. Let’s take a look.

By the time the mid-1930’s rolled around, Walt Disney had already made some huge strides in animation. But he began to set his sights on a new idea, one that was previously unheard of. He started production on Snow White and the Seven Dwarfs.

As we all know, this was going to be his first animated feature length film. Prior to Snow White, animation was done in short films. Studios didn’t think audiences would entertain the idea of watching an entire film made up of animation.

So, how do you get an audience to not only sit through a 90-minute cartoon but enjoy it as well? Walt wanted to add a sense of realism to the animation, a style that would become important to the studio for years to come.

But the nature of 2D animation is that it’s flat – especially the backgrounds. You can add a sense of depth, but a sense of depth isn’t the same as seeing depth. Think about how a drawing of a forest looks. You can make trees appear farther away by making them darker and smaller, and doing so adds a sense of depth. However, you still know it’s drawn on a flat sheet of paper.

The other problem with using 2D surfaces is closely related to the first problem. When the camera moves closer to the horizon line on a 2D surface, everything in the picture seems larger. The example that Walt used was a moonlight scene with a country house along a dirt road. As the camera “zooms in”, everything in the scene gets larger – including the moon. In real life, the moon doesn’t appear to get bigger when you walk towards it.

The Solution: A Huge Camera! 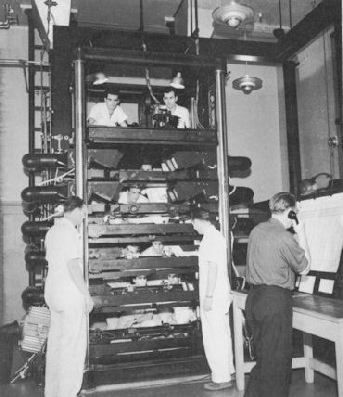 The solution to this problem was to break down elements of a scene into relative distances from the camera. You really can’t do this effectively with ink and paper, so Disney needed a new method to film animation. Interestingly, other studios were encountering the same problem. Even Ub Iwerks was exploring solutions, as he had separated with Walt by this time.

Walt and his team (namely Bill Garity who developed the camera and Roger Broggie who built it) set to work on a new contraption that would allow them to do this. The end result was huge – literally. They developed a new camera, what they dubbed the multiplane camera.

How does it work? First of all, the drawing is broken down into multiple planes of drawings (and we have a name for the device!). All of the elements in the scene that are closest to the viewer go into one plane and so on until the elements that are farthest away go into the final plane. These planes were glass, and the scene was painted onto the glass.

As I said, the camera was huge. The frame stood upright, and the camera itself looked from the top of the device down to the bottom of the device. Since the camera could hold several planes of animation, it was pretty tall. One stat I found listed the camera at 11’4” in height.

The frame of the camera was made up of four vertical posts, and each post had tracks for gears that ran the entire length of the post. These tracks allowed four of the five planes to move independently from each other (the final plane – the one closest to the floor – didn’t move as it was used for static sky backgrounds).

All of this culminated in an incredibly realistic look to the finished product. If we go back to the moonlight scene, the moon no longer looks like it’s getting bigger as you “move” through the scene. Since it remains in that last plane of animation, it doesn’t move at all and stays the same size through the entire scene. Other elements of the scene, however, move with varying speeds towards the camera – just how it would be if you took a camera into the real world and filmed the scene.

But new advancements in technology often come with some growing pains. The multiplane camera, while it made for some great-looking animation, gave animators some headaches. Each scene required a lot of preparation and planning. Animators had to figure out how each plane needed to move, how fast it needed to move, and so on. This amounted to a lot of time, and some of that was probably spent in trial-and-error sessions. Because of that, the cost for a multiplane scene was usually high, and Walt had to limit the use of the camera to his full-length films. To read more about this, check out this article.

While the camera was developed to bring that extra bit of realism to Snow White, it was first used in The Old Mill, a Silly Symphony that debuted in 1937. Walt won an Academy Award for this film, no doubt thanks to the technical advancements he made in this short film. And we all know the success of Snow White.

I know that Walt’s films succeeded for reasons other than the multiplane camera. You can’t ignore the camera’s contributions, though. Disney’s animation became known for its realistic style, and the multiplane camera had a lot to do with that. It would remain an important part of the animation for years to come.

An Era of Animation Draws to a Close

The Renaissance of Disney animation brought a new round of Disney classics to a new generation. It also brought some new technologies that once again upped the ante for animators. One such technology replaced the multiplane camera.

Disney had planned to use the camera in the 1989 film The Little Mermaid. However, the camera was reportedly in poor condition. Since the animators at Disney were unable to use their own camera, the multiplane scenes for the film were sent to another animation camera facility.

After that, Disney replaced the multiplane camera with CAPS (Computer-Aided Production System). This system allows animators to achieve “depth” effects with the help of computer animation, but that’s a different DizTech column for a different time.

The multiplane camera isn’t completely dead and gone, though. In fact, it can be found at the Disney Studios in Burbank. Also, be sure to check out a replica of the camera at One Man’s Dream in Disney’s Hollywood Studios at Walt Disney World. This is a great attraction for a bunch of reasons, so you should visit it anyway. There are a number of different pieces of Disney history there.

The multiplane camera was no doubt one of Walt’s greatest contributions to his field. It changed the look of animated features, and opened the door to more realistic animation for years to come. When you watch some of Disney’s original classics, keep an eye out for the effects created by this piece of technology. It’s truly something to appreciate!

describing and demonstrating the Multiplane Camera.