After nearly 2 years after the exciting announcement at D23 Expo (and years of rumors) Star Tours "2.0" 3D officially opens today to the public in Walt Disney World! Check out this video showing off the updated attraction.

**SPOILER ALERT** - The video actual HD footage of the many destinations which you can visit during your ride. You won't know which one you will see, so you can ride many times with a different outcome each time! You can also watch the grand opening event Live on Disney's Star Tours facebook page HERE at 10:30AM EST today!

Here are some clips from the Star Tours event at Disney Hollywood Studios held at 12:00AM on May 20th 2011. It is followed up with some comments made by some of the riders, including our good friend Brent Dodge

Disney: ‘THE ADVENTURES CONTINUE’ FOR THE JEDI IN ALL OF US -- Bridging that “long time ago” between the two Star Wars trilogies, spectacular new Star Tours adventures in 3-D will debut in 2011 in Disneyland park, taking voyagers – for the first time – to Coruscant and other destinations in the Stars Wars galaxy. The power of the Force and the magic of Disney once again will combine for this immersive experience in Tomorrowland. Fans also will be able to enjoy this exciting adventure in Disney’s Hollywood Studios at Walt Disney World Resort in Florida. Star Tours in Disneyland goes on hiatus beginning July 27 to prepare for the all-new journeys. 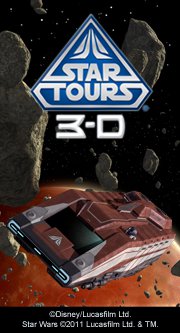 In the press event at Walt Disney World last night, Disney informed us that Star Tours 3D will be opening on May 20, 2011, just in time for Star Wars Weekends!!!

Update 6/14/2010:
Here's a new video that Disney has released. It seems to be a queue line video or something, but seems like we'll have some interesting destinations to visit when Star Tours reopens for business.

After years of rumors, CGI leaks and Frank Oz comments, Jay Rasulo, along with Darth Vader and a batallion of Storm Troopers announced Star Tours 2.0. Jay stated that it would be opening in 2013, but Vader demanded a 2011 opening. This exciting new version will be in 3D and will contain "elements never before used in any theme park attraction."