Many of Disney’s theme park attractions are revered for their technical achievements. The Enchanted Tiki Room, for example, was the first attraction to use Audio-Animatronic technology. It’s now considered a classic (in Disneyland, at least). More recently, the technological behemoth that is Toy Story Midway Mania! continues to be an extremely popular attraction – so much so that it has spawned a recreation on the Nintendo Wii.

There’s one ride, though, that was part of a technological revolution that may have changed transportation. The PeopleMover (in its original incarnation at Disneyland, then its baby brother at Walt Disney World) was a wonderful presentation of environmentally friendly technology that allowed Guests to tour the skies of Tomorrowland. In the spirit of the PeopleMover, let’s take our grand tour of the PeopleMover, the WEDway PeopleMover, and the Tomorrowland Transit Authority.

Some early ideas and a name that sticks. 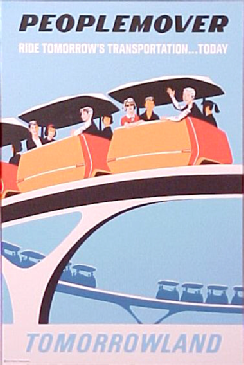 While Disneyland’s PeopleMover may have been the first popular use of this new transportation, Disney wasn’t the first company to toy with it. Goodyear (who would later sponsor the ride at Disneyland) actually teamed up with Stephens-Adamson Manufacturing almost two decades before the PeopleMover opened to create some type of people mover system.

They developed three ideas: a Speedwalk (much like moving walkways we see today), a Speedramp (the same idea as an escalator minus the steps), and the Carveyor. The last of those was the idea that almost took off. The New York City Transit Authority asked the two companies to build a Carveyor between Times Square and Grand Central, but the project failed due to politics. The two Disney Resorts, however, have used variations of the Carveyor people mover.

Thirteen years later, in 1967, Walt Disney and his team were working on the Disneyland Tomorrowland. They were developing a new attraction they referred to as a people mover – a tentative name for the ride. Bob Gurr, a Disney Legend in Imagineering, said the name stuck and it became official. The ride operated under the name PeopleMover until it closed in 1995.

How it works – Disneyland style and WDW style. 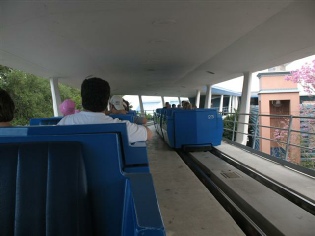 The WEDway people mover used a system that’s a good deal more complex than spinning tires. This newer version of the PeopleMover used a linear synchronous motor (LSM), a type of motor that depends on magnetism for movement. In LSM designs, an electrical current creates an electromagnetic field. The vehicles have magnets attached to them, and the interaction between the magnets and the electromagnetic field creates propulsion. Those are the basics, anyway.

This design has a number of benefits. First, it is environmentally friendly. In a world where everyone is trying to go green, this is a big plus. Second, there are fewer parts that wear out and need replaced. Also, fewer parts rely on friction. This helps tremendously with operating costs.

What’s interesting about the linear motor is that it has a number of different designs. The low-acceleration method, like what was used in the WEDway PeopleMover, also has designs that make it useful in heavy industrial situations (capable of lifting extremely heavy objects) and high thrust situations (capable of traveling up to 360 mph). There are also high acceleration models that use a linear induction motor (LIM). You’re probably familiar with one type of LIM: the launch system in the Rock ‘n’ Roller Coaster. Even though the TTA never travels above 7 mph and the Rock‘n Roller Coaster launches close to 60 mph, they both use a design of the linear motor!

How the PeopleMovers Changed Transportation

These attractions were really seen as prototypes for inter-city transportation. While larger forms of transportation (such as monorails and high speed trains) have taken over in that department, the PeopleMovers were among the first popular attractions to use this technology. They were developed in a time when discovering a more efficient method of moving people was all the rage.

When you ride on the TTA, it’s interesting to think that it was part of a revolution in transportation. Actually, when Disney asked Ford to sponsor the ride in Disneyland, they declined because they thought it may replace the automobile. We can see now that while that didn’t quite come true, the PeopleMovers still had their influence in transportation technology.