If you are anything like me, you’ve probably broken the bank way beyond fixing during the holiday season.  As the saying goes, it is much better to give than to receive, and boy did my wallet pay the price!  Now that the holiday season has come and gone and we are approaching spring, here is my first edition of a new “mini” series that will consist of items that are free (or practically free) that you can begin to collect on your next Disney vacation.

After each Disney vacation I come home with a ton of stuff.  I’m an avid scrapbooker, so I tend to collect everything that I can that is free around the parks in order to help make my trip’s memories stay alive in book form.  Although you might not be a scrapbook fanatic like myself, I guarantee that you will find a new or fun item that you can begin saving and collecting during each trip to the happiest place on earth.  The best part?  They’re free!  You heard me: F-R-E-E! FREE!  You’d be surprised at how many items are worth collecting that are free around the parks, so this is just the beginning of all things free at Disney.  Consider it a belated holiday gift from me to you.

This volume will consist of two freebie’s that are as much fun to collect as they are fun to use.  They include: park tickets and room keys.  Do you save these items during your vacation stay?  Ever since my first visit to Walt Disney World in 1985, I have saved both of these items.  That’s right.  I have every room key to every room I have stayed in during my entire life.  I also have every ticket my family has used during our vacations.  I have a keepsake box at home that I put all of the tickets and room keys in after each trip to the world.

Park tickets have gone through many changes over the years.  Original tickets were actual booklets with individual tickets you would tear out for the different attractions.  They had specific attractions listed on the tickets labeled A through E, with E being for the most popular attractions.  For example, if you wanted an eleven-adventure book, it would have cost you $5.75 for an adult and consisted of 1A, 1B, 2C, 3D, and 4E Tickets.   My father used to work at Walt Disney World and was part of the opening day parade.  Because of this, he received a special commemorative item given out only to cast members who were part of the opening day parade.  This item is a ticket book that is inside a glass block.  My father’s ticket is labeled number 0013.  Although some say 13 is an unlucky number, my family is feels very lucky to have it and we consider it a prized possession in my household.

This leaves me with my final question. If you had only one dollar to spend at the Disney theme parks and resorts, what would you spend it on?  I know what I would do with it- it’s my favorite collection, and it’s coming up in my next issue!

Stay tuned for another Magical Collections column next month. If there is a Collectable, or any other Disney related topic that you would like to see covered on DizFanatic.com please contact us. We would love to hear what's on your mind! 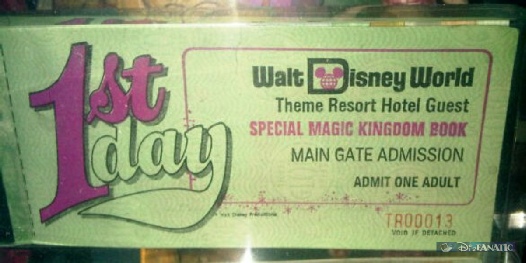 Since 1971, the tickets at WDW have gone through many changes.  The original ticket booklets that were distributed in the early years at Disney World changed into general admission tickets that needed to be hole punched, or stamped (1978-1980).  Instead, you would have purchased individual “passports” that could only be used at the Magic Kingdom or EPCOT when this second theme park opened in 1982. These tickets allowed access to all rides at the given park you attended.  These passport type tickets were finally discontinued in the late 1980s and early 1990s to make way for the tickets that we know and love today- the park hopper tickets.  I would assume Disney thought the use of a park hopper ticket (a ticket that allows you to hop from park to park) would be useful now that Walt Disney World consisted of three theme parks- Magic Kingdom, EPCOT Center, and Disney-MGM Studios (which opened in 1989).  Tickets changed from the hole punch or stamped tickets to the scanable ones during the mid-1990s.  The first scan ticket that I own is from the 25th Anniversary of Walt Disney World in 1996. 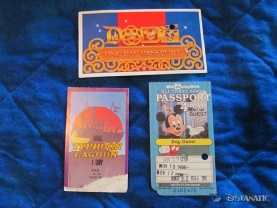 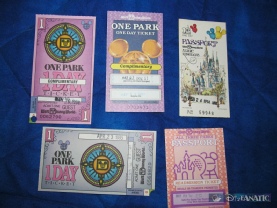 Each ticket has it’s own unique design to it, and this also changed as the years passed.  Originally there would be only one or two designs per year, but now you can find 5+ designs per ticket each year.  They typically have designs that celebrate what promotion is going on at the time.  For example in 1996, they had a 25 Years of Magic Celebration where the castle was turned into a giant pink birthday cake (epic fail) and the corresponding tickets had the 25th Anniversary logo on them.  This tradition continued as in 2006, they had “Where Dreams Come True” tickets that went with their Year of a Million Dreams celebration and in 2009 they had “Celebrate Everyday” tickets for their What Will You Celebrate? Promotion. 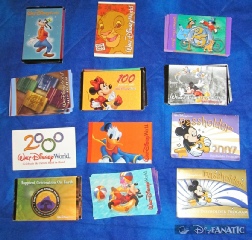 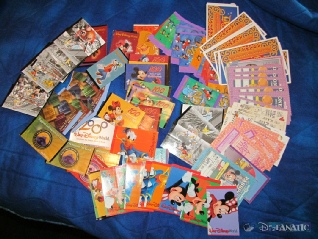 The room keys used today are entirely different from the room keys used back in 1985.  Today’s keys look the same no matter which resort you are residing at, however back in the day you used to receive an individualized key that corresponded with the hotel you were staying at.  I’m not sure exactly when they switched over to the new style, however my last key from a specific resort was from 1994.  It’s a fun keepsake to look back and see when and where I stayed on each vacation.  My most recent room keys have a home in one of my many scrapbooks, but the earlier keys or the ones in which I had multiple keys for the family members that stayed with me reside in my keepsake box.

I still collect my recent room keys, but the older ones are my favorites.  They each had their own unique flavor to them.  The older keys were also different in the sense that they merely were room keys.  They only allowed you into your room during your stay.  Today’s tickets are “keys to the world.”  This means they allow you entry to the parks if you have that option as part of your vacation package, as well as charging privileges, and the obvious access to your resort room. 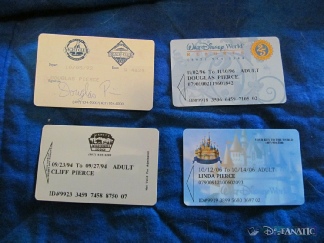