I go to high school in Las Vegas, Nevada and I went to Grad Night in Disneyland on Thursday, May 12th. We started off that day going to school and right after school we would have time to go home and get ready then come back to school. We left around 3 pm. The charter bus stopped at Barstow to eat dinner and take a break. It was about a six hour drive to Anaheim. We arrived at Disneyland at 8:30-9 pm. We received our tickets and walked to where the shuttle buses are and we're greeted by some nice people on a Grad Night float with cool affects and lights.

The security at Disneyland was extremely strict. Security was near the shuttle bus area and we were separated by sex. They made us take out all our belongings and put it into a clear plastic bag to be checked and then we'd get them back right after. We were patted down as if we were criminals, but I understand Disneyland just wants everything to be safe. Girls with boots had to take their shoes off and be checked as well.

We waited until the gates opened at about 11:30. We couldn't run or anything to the gate. We had to walk behind a cast member to get in. Once we got in we watched the intro with all the people dancing and the "lands" we being blocked so we couldn't go anywhere yet. I took pictures with Mickey and Minnie Mouse. They were dressed up in red cap and gowns! Honda also provided a card with all our professional pictures in it to get online for free too, so that was cool! ‬ 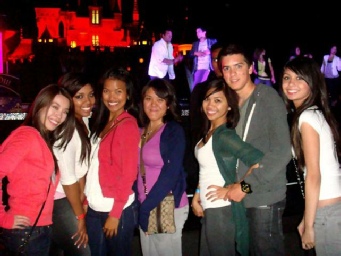 Near midnight, they released all the seniors to go have fun throughout the park after the countdown. Even though there were thousands of teens there, it felt less crowed compared to a regular visit! No youngsters or parents! Music blasting everywhere!! Four different clubs to dance at. One in front of "It's a Small World" (House), Thunder Mountain (Latin Club), the food area in Tomorrowland (Techno Club), and the main club in front the castle. It was crazy! Even a few people passed out on some lines for rides. ‬

There was barely any lines on some rides! I went on ALL the rides in Fantasyland! It was EMPTY. I also went on most of the rides in Frontierland and New Orleans Square. Some of the big rides were packed and had 2 hour waits which were Space Mountain and The Matterhorn Bobsleds. But Space Mountain was my last ride to go on! Best ride to end the night/morning! I went on 13-14 rides and on the regular visit I'd probably only go on 6 or 7. Major difference and it's weird going to Disneyland at night. That kind of experience is only made for us seniors! We got to see the sunrise at 6 am and it was finally over. I seriously didn't want it to end. Hands down the best night of my life. We then walked back to the bus at 6 am (no tram) and got on the the bus and on the road back home. 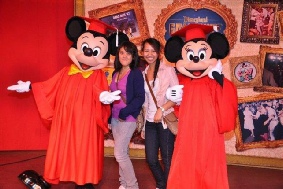 I didn't like it. I LOVED IT! The Fireworks (AMAZING), the dancing, and short lines were my favorite parts. I went because I haven't heard of Grad Night before and I didn't know they did these kinds of things for graduating seniors. Plus, I went to Disneyland already during spring break but I wasn't quite satisfied with all the tourists, loud children, the heat during the morning. Grad Night was definitely worth the money. It was one of the greatest memories my senior year! For sure!!!

Here is a video of the full "Explosion" Grad Nights fireworks & dance show which Camille was kind enough to share with all of us!