"Fantasound: An Audio Revolution Ahead of its Time."

The last time you went to a theater, did you notice the speakers hanging along the side walls? Do you have a speaker system in your house that gives you that immersive “right in the middle of the action” feeling? Have you ever stopped to thank Disney for this? You should.

Walt’s contributions to theater audio didn’t stop when Steamboat Willie changed the animation game. In fact, what we’re talking about today was a huge contribution to technology, even though it didn’t catch on right away. This edition of DizTech is all about Fantasound, the audio experience that introduced audiences to multi channel sound. In other words, this is the grandfather to our modern-day surround sound.

Even Fantasound Started With a Mouse 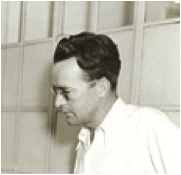 While Fantasound was created for Fantasia as a whole, the project really started with The Sorcerer’s Apprentice. Walt Disney was present when Stokowski recorded audio for the short cartoon. Disney loved the rich sound he heard during the recording sessions, but he didn’t love how the recordings sounded when played back. He thought they sounded “too tinny and un-dynamic,” and this obviously wouldn’t do for what Walt was envisioning for Fantasia: a film centered around not only animation but the full, rich sound of an orchestra. So he asked William Garity, the leader of his sound engineering department, to come up with something that could replicate that experience.

Garity and his team worked for months to get Fantasound going. This may sound like a long time to work on a single project, but keep in mind that modern companies take longer than this to release a product. We’re talking about an entirely new way of doing things. To have Walt tell Garity to come up with a solution in 1938 and have that solution recording audio by 1939 is pretty impressive. I think this dedication, imagination, and technical prowess was definitive of Walt Disney and those around him.

Making it Work: The Blueprint for Fantasound

As you can imagine, this wasn’t exactly a plug-and-play system. Synchronizing sound on a single speaker with moving pictures on the screen was hard enough, but now Walt wanted to do the same across multiple speakers. The recording and playback process was somewhat complicated.

Fantasound used multiple microphones to record different parts of the orchestra. All of these microphones recorded to different tracks, and there were a total of eight tracks. After recording, the team mixed these tracks down to three audio tracks. These tracks (along with a fourth track that was used for volume control, which allowed for automatic volume adjustment) were printed on a filmstrip and synchronized with a separate Technicolor filmstrip. (For more on this, click here. Also, if you want to hear it straight from Garity, I found an article published in 1941 that was co-written by Garity himself. It’s very interesting and loaded with tech jargon, but if you want to give it a go click here.) 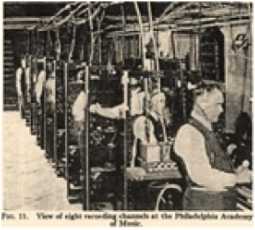 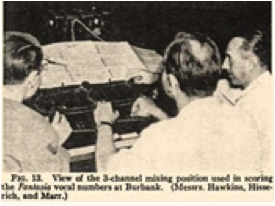 Here’s a staggering fact. Our iterations of surround sound are usually referred to as 5.1 and 7.1 systems. What this means is that there are either five or seven speakers (respectively) and one subwoofer (for those low, rumbling sounds) that make up that surround sound system. For Fantasound, theaters were equipped with anywhere between 30 to 80 speakers. The speakers allowed for a more dynamic sound, which fixed the “tinny and un-dynamic” problem that annoyed Walt earlier. Here’s another interesting fact: Disney became one of the earliest Hewlett-Packard customers by purchasing eight Model 200B oscillators to certify the speaker installations. These 200Bs cost Disney $71.50 each. Adjusted for inflation, they would run over $1,000 each today.

But these installations scared off RKO Radio Pictures, Disney’s regular film distributor. Requiring theaters to install these systems was simply too costly. Walt had to distribute the movie himself (for the first time ever) and planned a roadshow release for Fantasia. The show debuted in New York City on November 13, 1940, and also stopped in Los Angeles, Boston, Philadelphia, Chicago, Detroit, San Francisco, Baltimore, Washington, Minneapolis, Buffalo, Pittsburgh, and Cleveland. Sadly, Fantasound never materialized beyond these venues.

The Troubles of Being Ahead of Your Time 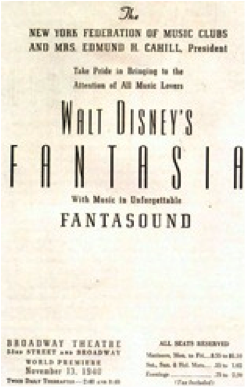 While the technology worked, and many said it was a marvel, Fantasound never really made it beyond Fantasia. There were a few reasons for this. First, Fantasound required a ton of equipment for each show, and it took a lot of time to transport the equipment and install it at the next venue. Second, installing the system would require shutting down the theater for a few days, and theaters were reluctant to do so. Third, wartime conditions made it hard to develop a system more conducive to road travel. Also, different areas of the country had different regulations about installing and operating such equipment, making the project somewhat of a headache. Finally, space in the projection room was a problem as the Fantasound system was quite large.

Disney handed the film over to RKO in April 1941, and RKO immediately mixed a mono version to distribute to theaters nationwide. While this allowed plenty of people to see the film, it may have hobbled its overall effectiveness. During Walt’s time, Fantasia was not the success he envisioned it would be. We may consider it a classic, but if Fantasound had taken off it may have become a landmark.

In 1942, however, Walt Disney, William Garity, and John Hawkins received an Academy Award for advancing sound in motion pictures. Later, stereophonic sound was brought back to Fantasia for a 1956 re-release. For this release, copies were made on magnetic sound film because the original recordings were believed to be destroyed. These magnetic copies would come in handy for the 1990 theater release and the 2000 Fantasia DVD.

The Cost of Timing

The underwhelming success of Fantasound can basically be chalked up to timing. If Disney had more time to develop the technology, they would have almost certainly found more effective ways to build and distribute it. Because of the timing, though, it was simply too costly and too difficult to distribute nationwide.

You can’t ignore, however, its impact on modern sound. We expect multi channel sound nowadays. Disney was the first to work on the idea, and the impact of their work (although it didn’t exactly pay off at the time) is still felt today.

If you want to read more about Fantasound, be sure to check out these links for some extra reading material!