Today, the first phase of the resort has officially opened! This phase contains the buildings of the Finding Nemo section, The main building with check-in, food court and gift shop. See the video below for some highlights of the ceremony as well as a tour through part of the resort!

Friend and Fellow DizFanatic John attended a cast member preview of the resort just the other day. With his trusty iPhone He grabbed plenty of great photos to share with his DizFanatic friends around the world!  Click the full-screen button on the lower right corner of the gallery for a larger view!.  Also, check out this nice video tour around the grounds of the Finding Nemo section of the resort.

The first wing of the new Disney’s Art of Animation Resort will open to Guests on May 31, 2012, as construction on the 25th resort hotel at Walt Disney World continues on schedule.

At a media gathering today, Walt Disney Imagineering and Walt Disney World Resort Operations released images of new icons arriving at the resort this fall and shared some of the details Guests will see when Disney’s Art of Animation opens next year. For example, Guests exploring The Lion King courtyard will see characters from the film, such as the hyenas and the evil Scar, through the eyes of Simba and in the same size and scale as the young cub would experience them.

“Here at Disney, we are in the Guest experience business,” said Kevin Myers, vice president of resort operations for Walt Disney World Resort. “When we develop a new resort hotel, we draw on Guest feedback about our parks, entertainment, special events and every aspect of Walt Disney Parks and Resorts to provide a resort hotel experience that only Disney can deliver.”

Examples of enhancements based on Guest feedback will be evident at Disney’s Art of Animation Resort in the food-and-beverage and recreation offerings. The dining area will feature items such as fresh smoothies, hand-scooped gelato and Mongolian barbecue. The resort also will feature the largest swimming pool outside of Disney’s water parks, as well as an extensive children’s water play area at the larger-than-life icons for the Finding Nemo wings of the resort.

Located adjacent to Disney’s Pop Century Resort, the new resort will include 1,120 family suites in The Lion King, Cars and Finding Nemo wings, and 864 themed rooms in The Little Mermaid wings. Suites will feature both a living room and bedroom, offering added space for families.

The family suites and rooms at Disney’s Art of Animation Resort will fit into the “value” category of lodging, with nightly rates similar to Disney’s All-Star Resort and Disney’s Pop Century Resort.

Some fun facts about Disney’s Art of Animation Resort -

• With an area of 11,859 square feet, the feature pool at the Finding Nemo wing of the resort will be the largest swimming pool at Walt Disney World Resort outside of the water parks.

• The new resort hotel will feature 9,400 doors, which if stacked flat would be taller than the Empire State Building.

• The 227,000 lineal feet of carpet being used on the project would be enough carpet to stretch from Orlando to the Kennedy Space Center in Titusville.

You can see a new Areal Photo from above the construction site in our Areal Photos Gallery!

Booking dates for this family-friendly resort, scheduled to open Summer of 2012, have not been announced yet. Please continue to check back for more information and details.

Step into some of your favorite stories! Each one of the Disney's Art of Animation Resort buildings are being designed to make you feel like you are part of one of 4 beloved animated films. Trace the movie's theme, from the playful courtyards to the festive room interiors.

The 864 rooms planned within The Little Mermaid buildings will be sea-inspired with an eye towards value.

The Lion King, Cars and Finding Nemo buildings are planned to exclusively feature family suites which accommodate up to six guests. The concepts show a total of 1,120 family suites—all arranged for added space and comfort.

The concept for these family suites include:

Kids and kids at heart will be able to romp through one of the 4 courtyards—one courtyard for each film—where there will be icons and sculptures to interact with and play around. Make a splash in the main pool—complete with a pool bar—or relax in one of the 2 quiet pool areas. Planned amenities at Disney's Art of Animation Resort include an animation-themed food court, arcade, retail location and interior airline check-in stations.

Location and General Information
Disney's Art of Animation Resort is scheduled to be located near Disney's Hollywood Studios theme park and ESPN Wide World of Sports Complex. It will be a smoke-free Resort; smoking will be permitted only in designated outdoor smoking locations. 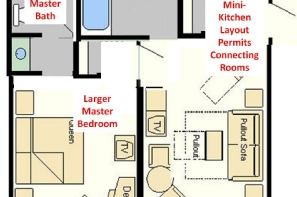 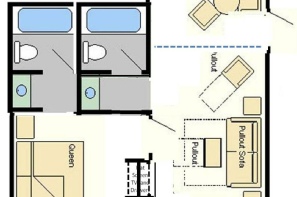 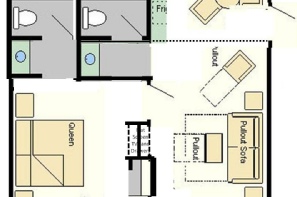 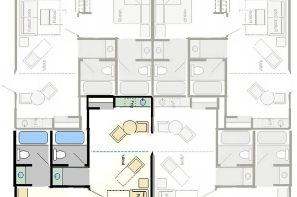 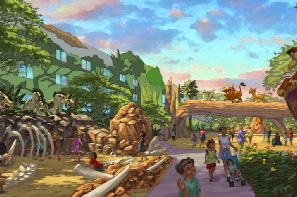 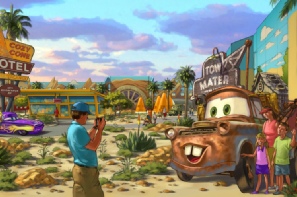 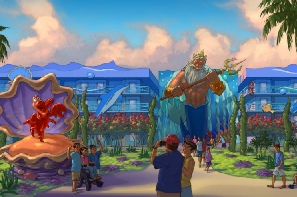 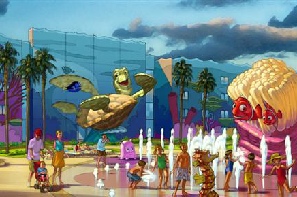