Disney has announced the line-up of the new concept Disney Stores scheduled to open in 2011 across North America, Puerto Rico and Europe! No actual dates have been given but we will update you as we learn more.

· Mall of America in Minnesota, the second largest mall in the United States, will open its first ever Disney Store

· For the first time in 10 years, Puerto Rico will have its very own Disney Store when an experiential new store opens at Plaza Las Americas this summer

· The first newly designed Disney Store in Canada will open in the remodeled Square One Mall in Mississauga, Ontario and Metropolis in Vancouver, British Columbia will also open an inaugural store.

· Bromley and Nottingham in the UK, Lyon in France, and Naples in Italy will be remodeled to the new design

· Two Spanish locations, Cadiz in the Southwest and Las Arenas on Gran Canaria, one of the Canary Islands, will also be remodeled locations.

Read more about the new concept Disney Stores below and check out our free podcast covering the stores at DizFanatic.Podbean.com

in Major Markets Across the U.S. and Europe in Summer 2010

Disney Store is poised to redefine children's retail, launching a magical new store design in major markets across the United States and Europe this summer. The innovative Disney Store design will be unveiled for the first time in June at The Shops at Montebello in Montebello, CA just outside of Los Angeles, followed by the European premiere in early July in Madrid, Spain at La Vaguada. A unique destination developed from a child's perspective, the new store design integrates the latest technology to create an enhanced shopping experience inspired by Disney's most popular characters and stories.

"We have infused Disney magic into all elements of this one-of-a-kind retail experience, and have selected prime retail centers to launch the Disney Store of the future," said Jim Fielding, president of Disney Stores Worldwide. "Special features like the iconic Disney Princess castle with magic mirror and the Disney Store Theater are just two of the amazing elements in the new store that will enrich every child and family's experience at the Disney Store."

Each new store has special significance and will be celebrated as an important milestone in Disney Store's growth and evolution.

With each new store opening in 2010, Disney Store will designate a day for 10 percent of the sales to be donated to the Make-A-Wish Foundation in the U.S., Spain, Italy and Portugal and to Great Ormond Street Hospital Children's Charity in the UK. 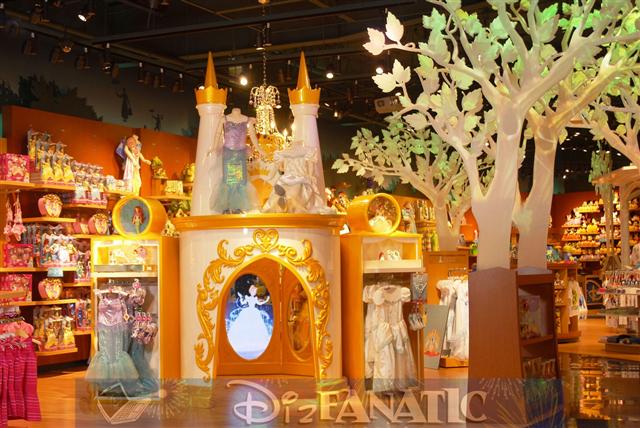 The innovative new Disney Store design will feature many iconic elements, including a Disney Princess castle with magic mirror, where children are encouraged to play and interact. Each time a child waves a magic wand in front of the mirror a Disney Princess will appear, bringing the fairytale to life.

PASADENA, Calif., June 29, 2010 – Today, Disney Store celebrates the launch of its newly-designed store with a grand opening event at The Shops at Montebello complex in Montebello, Calif, just outside of Los Angeles. A crowning achievement of The Walt Disney Company, the high-tech makeover of Disney Store solidifies the retailer's global leadership in children's retail and activates the future transformation of its more than 300 locations worldwide. Among the many new attractions of the newly designed store is the first-ever Disney·Pixar CARS-branded RIDEMAKERZ experience which sets the stage for kids of all ages to build 1:18 scale toy custom cars inside of Disney Store. Disney Store executives, stars from the upcoming Disney Channel Original Movie "Camp Rock 2: The Final Jam" and characters from Disney·Pixar's blockbuster film franchise Toy Story joined the festivities and greeted hundreds of Disney fans who waited excitedly for the opportunity to experience the innovative new store.

The Montebello store is the first of 20 newly designed Disney Store locations that will open across major markets in the United States and Europe in 2010. The 4,800-plus square foot store's floor-to-ceiling remodel now features multimedia technology, interactive storytelling and Disney Store exclusive merchandise that bring Disney's most beloved characters to life for families in the local community.

"As part of Disney, we're committed to the value of entertainment and exclusive experiences," said Jim Fielding, president of Disney Store Worldwide. "Disney is setting a new standard for the specialty retail category by integrating robust technology and creative store planning to make each visit customizable and that much more memorable. This is truly an immersive, one-of-a-kind retail experience for children and families that only Disney could deliver."

Technology is integrated throughout the new store to create magical moments for guests:

The newly designed Disney Store is merchandised by franchise neighborhoods so guests can easily shop by character or theme and is anchored by several "hero fixtures" including:

A customizable shopping experience:
The new store concept also includes the launch of an all new in-store application where guests can customize their shopping experience. Accessed via an interactive kiosk with touch screen, this animated experience gives users the ability to navigate a 3-D view of all Disney Store and DisneyStore.com products and discover the latest Disney Store news via video clips, articles, and social media feeds. This application allows the Disney Store to share its news to customers, who can then share information and in-store events via email, Twitter and Facebook.

The Disney Store Theatre:
The newly designed stores will also feature a theater as part of its marquee attractions. Guests can pick from a selection of pre-loaded content that will be updated regularly and can view classic and new Disney entertainment, sneak peek previews, music videos and more. The theater will also serve for special in-store events such as reading time, scavenger hunts and more.

The "Pixie Dust Trail" and "Magical Trees":
With is glistening blue glitter, the Pixie Dust Trail leads guests through the store and to major interactive elements as they enjoy a Disney-themed skyline and surrounding magical trees which are programmable with changing colors, images, and music set to an array of Disney themes.

The newly-designed Disney Store is scheduled to open in the United States this year at the following locations:

With each new store opening in 2010, Disney Store will designate a day for 10 percent of the sales to be donated to the Make-A-Wish Foundation in the United States.