From Screen to Theme: A Guide to Disney® Animated Film References Found Throughout the Walt Disney World Resort

Not often does a Disney fanatic get his hands on such a book before the general public, but this was one of those times. I had the privilege of purchasing a copy hot off the press. Yes, I know that this is something that may not excite the masses, but as a true DizFanatic, getting my hands on something Disney, on day one, (or before day one in this case) excites me. Like one of like those guys waiting on line for Apple’s latest creation, or a brand new Play Station or X-Box console. Now don’t get me wrong; just because I must get these things on day one, I am not always satisfied with the treasure. There have been many disappointments throughout the years. And this is definitely NOT one of them. 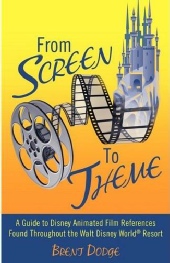 “From Screen to Theme: A Guide to Disney Animated Film References Found Throughout the Walt Disney World Resort” is the first in a new book series from Author Brent Dodge. I am told that volume 2 is already in the works. More on that later. The kind of long title of the book really gives you a pretty good idea of what you’ll find within the pages. Truly a new concept, it’s a cross between a guide book and a trivia book which focuses on Disney Animated films and Walt Disney World parks and resorts. Now that may be as much of a mouthful as the title, but it truly works well.

I found this book to be easy reading, well organized and fun to read. It can be enjoyed two different ways. Read it as you would any book, at home, commuting (as I did) or relaxing by your favorite Disney resort pool. Informative and entertaining. However, it can also be utilized as a guide book, in Walt Disney World, to hunt down your favorite character or movie references.

After reading the first chapter, I fell in love with this book. The engineer in me loved the format, while the Disney Geek in me loved the immersive information on my favorite topic. Each chapter focuses on a single Animated film. Starting off with “The film in three paragraphs”, you will get a refresher of the film’s storyline to prepare you for the rest of the chapter. Next, Brent Dodge takes you through each WDW theme park to point out all of the references, big or small, to that movie, or its characters. Brent explains: “The references in this book range from the obvious (yes, Peter Pan’s Flight is based off of “Peter Pan”) to some extremely hidden ones (one of the rafts on Kali River Rapids has a nod to a character from “The Jungle Book”). After the parks, he takes you through Downtown Disney and finally the Disney resort hotels.

Some neat facts pop up throughout each chapter. They may be about the animators and voices in the films, or little known secrets about the films, rides or attractions. Those “Fun Facts” as they are denoted in the book, will keep the Disney geek in you satisfied. A fun surprise that was truly unexpected for me is the “Character Meet and Greet Alerts” that can be found in most chapters. Yes, we all know we can find Mickey in (the soon to vanish) “Mickey’s Toontown Fair”, and I ALWAYS know where to find my precious Tinkerbell, most character meeting places are not posted on Disney maps. So do YOU know where to find The Queen of Hearts, Cinderella’s stepsisters, Jiminy Cricket, Donald Duck, Princess Jasmine or Mulan? Brent will tell you where you can meet them and others.

As I mentioned earlier, this is the first installment of the “From Screen to Theme” series from Brent Dodge. The next book, I am told, will cover live action film references in the Walt Disney World Resort. And he has others in the works, which he will formally announce at a later date.

So whether you’re looking for a good source of Disney information, a new twist on the guide book, or you want to find those hidden references to your favorite Disney Animated film, this book is for you. Oh, and of course if you’re a Disney geek, then you would just be flat out crazy not to get yourself a copy of this book.

You can purchase a copy from Amazon.com, and you can view some sample pages there as well.  However, I recommend getting an autographed copy directly from the author at www.FromScreenToTheme.com.

Stay tuned for more reviews coming soon. If there is a Disney related topic that you would like to see reviewed or covered on DizFanatic.com please contact us. We would love to hear what's on your mind!

DizFanatic.com has NOT been compensated for this review.