The Sum Of All Thrills Open In EPCOT’s Innoventions East

The Sum Of All Thrills Opening In EPCOT’s Innoventions East 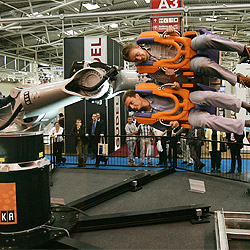 Now open in Innoventions East, castmember previews began October 10, 2009 for the latest attraction in EPCOT, sponsored by Raytheon. This exciting new 4D thrill, “The Sum of all Thrills”, is based on a combination of ride systems; one being an enclosed simulator, and the other being the newly developed robotic arm system by the Kuka Robotic Group.

The ride system was first introduced to the public in 2002 with 2 seats mounted to the end of a robotic arm. The numerous rotating and pivoting points give this simulator countless maneuvers.

After a brief pre-show, which will introduce the sponsor, Raytheon, guests will issue an electronic card as they enter a room with touch screen displays. This is where they will swipe their cards and begin the design process. The design process involves selecting one of three “rides”; the mild bobsleds, the moderate roller coaster and the ultimate thrill of a jet fighter. Then guests continue to select several features of their track or course. Once the design process is complete, guests then cue up to ride their creation. Sound familiar? Then you must have ridden Cyber Space Mountain over at DisneyQuest. The “workflow” is similar but the ride experience will be different because of the completely new robot arm ride system. 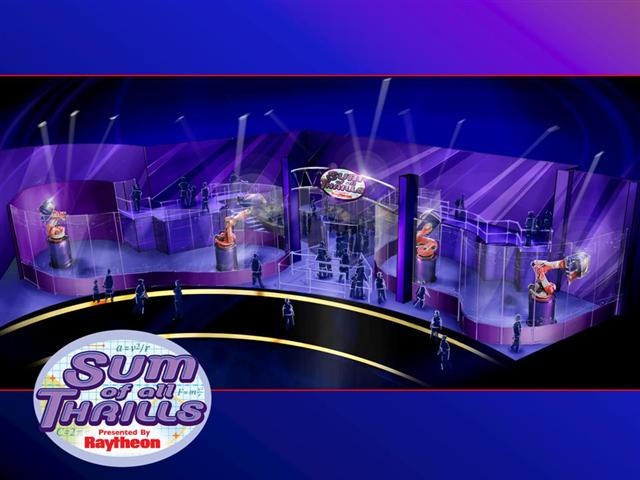 The ride itself will last about two minutes. Guests will be seated either alone, or with one other guest in your two-person vehicle and experience the latest in simulator computer generated graphics, full simulator motion and wind effects within the fully enclosed capsule. Riders must be a minimum of 54” tall. See the Kuka Robotics official press release below the Disney Concept Art.

Clinton Township/Augsburg,– KUKA Robotics Corporation, the US subsidiary of the KUKA Robot Group, is pleased to announce the usage of the RoboSim 4-D Simulator ride system as part of a new exhibit at INNOVENTIONS in Epcot at the Walt Disney World Resort in Lake Buena Vista, Florida. The addition of the RoboSim 4-D Simulator is an expansion of KUKA’s current presence at INNOVENTIONS at Epcot. 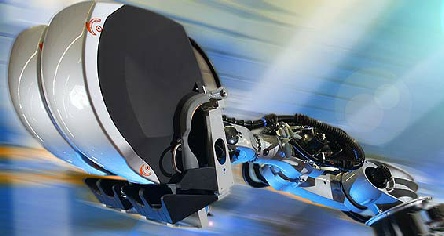 KUKA currently sponsors Rockin’ Robots - a 2,000 plus square foot interactive exhibit allowing guests to conduct a robotic band located in the INNOVENTIONS West building. “The popularity and expansion of INNOVENTIONS coupled with KUKA’s unique and innovative robotic and educational solutions in this exciting entertainment and education project will enhance the KUKA brand presence while strengthening our continued growth in the North American market.” stated Stu Shepherd, President of KUKA Robotics Corporation. “We are excited for the opportunity to demonstrate KUKA’s unique capabilities in a market that drives progress and interest in learning.”

The KUKA RoboSim 4-D Simulator creates a 4-dimensional experience through  3-D robotic motion and “wind”, by controlling air movements to stimulate the senses providing a more realistic simulation experience involving high speeds, quick direction changes and different climates for a unique sensation. The appeal of the 2-seat simulator is that it does not fully enclose the rider, but allows the rider’s legs and feet to be suspended. The spherical carbon-fiber hood, which is integrated as part of the unique KUKA RoboCoaster ride system, immerses the rider into a true sensory experience by using high definition video combined with stereo sound and controlled air motion. “The KUKA RoboCoaster programmable robotic ride system utilizes 6 axes and 6 degrees of total directional freedom with synchronized “under the hood” entertainment provides a thrilling experience like no other.” commented Stu Shepherd.

The RoboSim 4-D Simulator is TÜV certified and includes safety devices such as smoke alarms and temperature monitoring. Video cameras and microphones allow RoboSim operators to monitor passengers at all times. 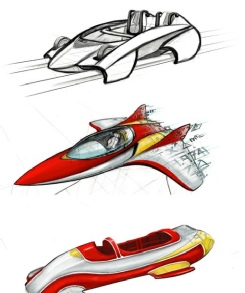 About the KUKA Robot Group

KUKA Roboter GmbH, Augsburg, is a member of the KUKA Aktiengesellschaft and ranks among the world’s leading suppliers of industrial robots. Core competencies are the development, production and sale of industrial robots, controllers, software and linear units. The company is the market leader in Germany and Europe, and the number three in the world. The KUKA Robot Group employs about 2,200 people worldwide. Of these, 1,200 are employed in Germany, either at the KUKA Robot Group headquarters in Augsburg, or at various subsidiaries. In 2008, sales totaled 474 million Euro. 25 subsidiaries provide a presence in the major markets of Europe, America and Asia. KUKA Robotics Corporation ist based in Clinton Township, Michigan.

About INNOVENTIONS at Epcot
INNOVENTIONS is located in the heart of Epcot at the Walt Disney World Resort in Lake Buena Vista, Florida. Creativity and imagination abound as guests celebrate inspiration and the innovations that improve their lives and expand their horizons. Hands-on, interactive exhibits allow children and adults to be immersed into ideas that inform, entertain and inspire. For more information, contact Stacia Wake at stacia.l.wake@disney.com or visit www.innoventions.disney.com