With the long awaited and exciting release of Tt Games' "Lego Pirates of the Caribbean", Here is some insight from an interview with Jonathan Smith, Head of production at Tt Games: 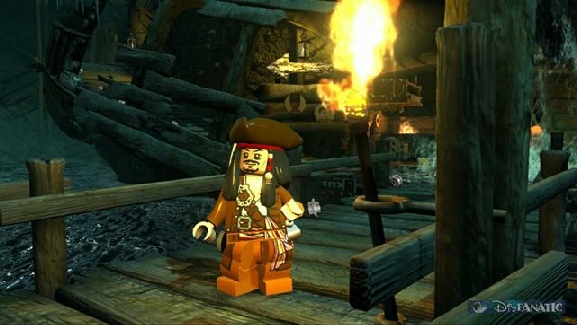 1. Aside from being filled to the brim with pirates, what's new in this addition to the LEGO video game series?

We’ve had a ton of fun playing in the world of Pirates of the Caribbean, and the colorful characters in those stories have loads of great new abilities. They can climb, balance and swing around the place in new ways. Jack Sparrow can use his compass to locate surprising hidden objects! Ragetti can take out and throw his eyeball! Bootstrap Bill can merge into the hull of The Flying Dutchman, and emerge somewhere entirely different!

2. One thing that's different about LEGO Pirates of the Caribbean is that the game will see new life on the Nintendo 3DS. What was it like developing the game for the glasses-free 3D system? What challenges exist in producing a game intended for 3D that may not exist in developing a game on other platforms?

We’ve loved working on 3DS, and we’re lucky enough to have some incredibly brilliant programmers who, with help from Nintendo, were able to take advantage of glasses-free 3D to create an immediately more immersive new game experience. The challenge was to tune the 3D effect to be both dramatic and comfortable throughout the whole game, and we’re really pleased with the final results.

3. The 3DS also features the new Street Pass system. How will LEGO Pirates of the Caribbean utilize Street Pass?

In Pirate Duel, players pick a character, then select a series of attack and block moves. When you put the console into Street Pass mode and encounter another pirate, you’ll fight using those move. When you go back to your console you’ll be able to watch the fights and see who won. All your fights are tracked so you can see how many times you’ve won or lost. You start off with a default pirate, but you can use play coins to unlock new characters to use in Street Pass play. These characters include favorites like Jack Sparrow, Davy Jones and even Blackbeard.

4. One of my favorite details I've seen in videos of game play is Jack Sparrow's walk. How long did it take to get that movement just right?

Along with those brilliant programmers I mentioned earlier, we’re also lucky enough to have a team of quite fantastic animators, who are now well versed in the LEGO style. Their eye for caricature, sense of humour and attention to detail make every new character a delight. Jack Sparrow is certainly a highlight. He has hundreds of different individual animations, but his basic walk, which so many people have enjoyed so much, took only a couple of days… backed up by years upon years of training and experience!

5. What's next for the LEGO series? I see LEGO already makes products for other Disney titles like Cars, Toy Story, and Prince of Persia. Any chance we could see those get the video game treatment?

In a LEGO world, anything is possible! We certainly have exciting plans for the future, and we look forward to revealing them in due course…

Unforgettable Cut Scenes – Everyone’s favorite scenes from the Pirates of the Caribbean films are re-rendered with LEGO minifigures, in the humorous style synonymous with LEGO video games

Freeplay – Building a collection of characters throughout the game, players can then use their distinctive abilities to gain access to previously unavailable areas