the 15-story Bay Lake Tower at Disney’s Contemporary Resort is scheduled to join the Disney Vacation Club family of properties in fall 2009, while

the Treehouse Villas at Disney’s Saratoga Springs Resort & Spa, scheduled to open in summer 2009, will become the next room category offered at that resort.

Disney Vacation Club also announced that Bay Lake Tower sales are scheduled to begin on Sept. 21 for Disney Vacation Club Members, while sales to the general public and sales for the newest phase of Disney’s Saratoga Springs Resort & Spa will begin at a later date.

“Our founder, Walt Disney, was well known for having one foot in the past and one in the future,” said Disney Vacation Club President Jim Lewis. “These new resort developments share that dynamic sensibility, blending modern luxury and design with the nostalgic spirit of two of the most storied resorts in Walt Disney World history.”

The announcement comes during an unprecedented era of growth for Disney Vacation Club, established in 1991 to give families decades of affordable vacations at Disney destinations and beyond. Disney Vacation Club membership has more than doubled since 2004, expanding to include more than 350,000 individuals from approximately 100 countries and every U.S. state.

That membership growth has also driven Disney Vacation Club expansion, inspiring Walt Disney Imagineers to dream up new vacation home opportunities. In addition to Bay Lake Tower and the Treehouse Villas, development continues on Disney’s Animal Kingdom Villas at the Walt Disney World Resort in Florida, The Villas at Disney’s Grand Californian Hotel & Spa at the Disneyland Resort in California and the recently announced resort at Ko Olina on the island of Oahu.

“What excites me most about this tremendous growth is that we’re not only creating new accommodations, but new experiences,” Lewis said. “Each of the projects we’ve undertaken at Disney Vacation Club is unlike anything previously available in our resort portfolio, and both Bay Lake Tower and the Treehouse Villas proudly build on that tradition.”

Bay Lake Tower at Disney’s Contemporary Resort
The new, curvilinear Bay Lake Tower at Disney’s Contemporary Resort is designed to complement the fabled styling of the original building, which opened with the Magic Kingdom Park on Oct. 1, 1971, and featured comedian Bob Hope as master of ceremonies. Mimicking the color palette and strong horizontal lines of its iconic predecessor, the new structure even sports a rooftop lounge inspired by the original resort’s A-frame architecture.

The tower’s crescent shape, hugging lush landscaping, planned recreation options and a lakeside pool, promises to deliver some of the most dramatic views available anywhere at the Walt Disney World Resort. Some villas face scenic, undeveloped stretches of Bay Lake, while others offer spectacular views of the Magic Kingdom Park, located a short walk away.
The views promise to be equally appealing inside the tower’s 295 two-bedroom-equivalent villas, where visionary design meets Disney chic to define the vacation experience. As the closest resort to the Magic Kingdom Park, Bay Lake Tower guests can easily return to their rooms for quick breaks from their busy day in the Park, where they can relax in an inspiring setting offering many of the conveniences of home.

Most of the rooms in this iconic resort will feature innovative touches, such as modern artwork designed specifically for Bay Lake Tower, flat-screen TVs, full kitchens complete with granite countertops and modern appliances, separate bedrooms, washers and dryers, and other home-like amenities. Plus, to accommodate larger families or families traveling together, many Bay Lake Tower vacation villas are designed to sleep up to nine, though some units can also be divided into one-bedroom villas that sleep five and studios that accommodate four, creating flexible options for smaller groups.
“These vacation homes will be furnished with some amazing custom pieces that are works of art unto themselves,” said Imagineer Brian McFarland. “It’s all about maintaining that feel of clean lines and open spaces, with plenty of Disney touches.”

Add to the plans a spacious lobby filled with woven woods and glass-wrapped columns, sweeping views from a rooftop lounge and fireworks viewing deck, and the convenience of a sky bridge linking families to shops, restaurants and the monorail station, and you have a Disney Vacation Club destination that is both practical and fashionable. 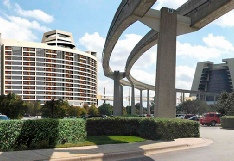 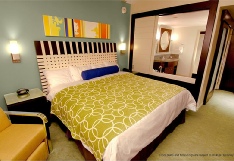 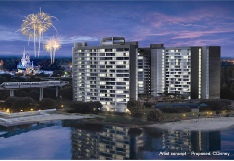 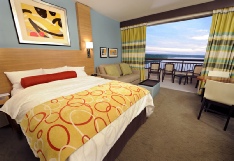 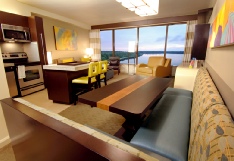 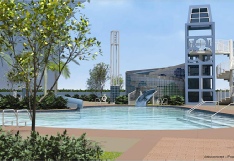 Meanwhile, nestled in natural forest glens just around the river bend from the bustling Downtown Disney area, the Treehouse Villas at Disney’s Saratoga Springs Resort & Spa will mark the newest phase of what has become the largest Disney Vacation Club resort. Phase one of the idyllic lakeside community debuted in 2004, and phase three sold out earlier this year.
This new phase will revive Walt Disney World “treehouse living,” a cherished tradition from 1975-2002. While crews are replacing villas of the ‘70s with brand-new vacation homes, Imagineers took special care to honor the original octagonal design.

The construction process itself is unique as each stand-alone Treehouse Villa will come together like a giant 3-D puzzle to ensure both superior quality and environmental sensitivity.
All 60 three-bedroom homes, elevated 10 feet off the ground on pedestals and beams designed to blend into the forest environment, will sleep nine and are planned to offer modern luxuries such as cathedral ceilings, granite countertops and flat-screen TVs, all presented in a style dubbed “cabin casual.”
“I was lucky enough to have a treehouse as a kid, but it was certainly nothing like this,” said Imagineer Todd Thomasson. “In developing this resort, we’ve all learned a new word, ‘glamping,’ which apparently means glamorous camping. The Treehouse Villas will be glamping at its absolute best.”

Nostalgic memories of childhood playtime translate into over-the-treetops family vacation time with the addition of the Treehouse Villas to Disney’s Saratoga Springs Resort & Spa. Evoking a sense of adventure that makes kids feel more like grownups and grownups feel more like kids, the Treehouse Villas at Disney’s Saratoga Springs Resort & Spa will combine a dash of luxury and comfort with the nostalgic memories of a childhood fortress.

When designing the new Treehouse Villas accommodations, Disney Imagineers went to great lengths to ensure that the new villas would actually lessen the original villas’ footprint. As a result, Disney Imagineers were able to reduce encroachment on the surrounding wetlands by 70 percent for each individual home site.

Treehouse Villas’ Unique Construction Process
Rather than heading to the nearest hardware store to purchase a few 2” x 4”s and a handful of nails, Disney Imagineers will break the typical treehouse mold with the construction of the Treehouse Villas at Disney’s Saratoga Springs Resort & Spa. The construction process itself is unique, as crews will assemble all 60 vacation homes onsite like a giant 3-D puzzle.

Treehouse Living With All the Comforts of Home
Designed in a style decreed “cabin casual,” the Treehouse Villas will offer much more than the rope ladder and snack stash typically found in childhood treehouses. Elevated 10 feet off the ground, these villas will offer three bedrooms and two baths while comfortably accommodating up to nine Guests. An open kitchen will boast an island sink and a counter area offering seating for three, while a separate dining table will seat up to six. In addition, flat-screen TVs will be found in the living room and each bedroom, giving Guests an opportunity to catch up on the day’s latest news stories or favorite TV shows while relaxing after a fun-filled day at Disney’s theme parks. Throw in cathedral ceilings and granite countertops for a treehouse that surpasses every childhood expectation.

Resort Amenities
The Treehouse Villas at Disney’s Saratoga Springs Resort & Spa will feature its own planned pool area, in addition to sharing all that the main resort has to offer, including boat transportation between the Downtown Disney Area and the Disney’s Saratoga Springs Resort dock, tennis courts, bicycle rental, a children’s playground, a nearby spa and fitness center and High Rock Spring Pool, which boasts its own water slide and whirlpool spa.


Fun Facts
Disney Vacation Club has doubled its membership since 2004 to include more than 350,000 individual members from each U.S. state and approximately 100 different countries.

Environmental sensitivity was extremely important to Disney Imagineers when constructing the new Treehouse Villas. As a result, 5,178 tons, or 65.22 percent, of materials from demolition were recycled, including concrete and metals.

When it comes to wiring, Disney Imagineers working on the Treehouse Villas went to great “lengths” to ensure every vacation home runs smoothly. Consequently, there are 87,858 lineal feet, or 16.6 miles, of wire for fiber optics, copper, telephones and CATV.

To support all 60 Treehouse Villas, there are a total of 480 concrete columns.

Number of Guests per Unit:
Villas accommodate up to nine Guests 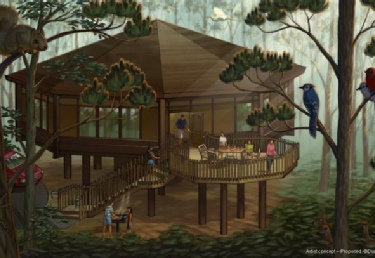 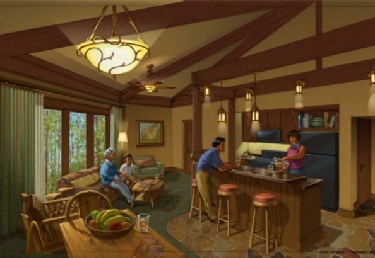