"A Hands On Review of Epic Mickey"

Hi folks! I wanted take a few minutes here to give you my first thoughts on the recently released, Epic Mickey.

This is quite possibly my favorite Wii game to date, and while I still like Kingdom Hearts better, Epic Mickey is fighting hard for that spot as my favorite Disney game. I should back up a bit and start when I picked up my game. I was waiting outside the Gamestop, along with several other people, but once we got inside I found out that I was the only who pre-ordered the collector's edition of the game. Seeing the envious faces as I walked past the others was a huge boost to my gamer ego.

As soon as I got home I felt like a little kid again, ripping open the plastic barrier preventing me from getting to the good stuff on the inside. After digging out all the extra plastic padding, I found what I wanted first, the Epic Mickey figurine. Wow this thing is too cool! I was surprised at how big he actually is. He even comes with a detachable paintbrush.

The next thing I found inside the box was not something I was too excited about, the console and wiimote sticker skins. I mean don't get me wrong, they are really cool looking, but I don't wanna get them ruined by putting them on the console and wiimote. The wiimote's constant use will cause a noticeable wear on the sticker. 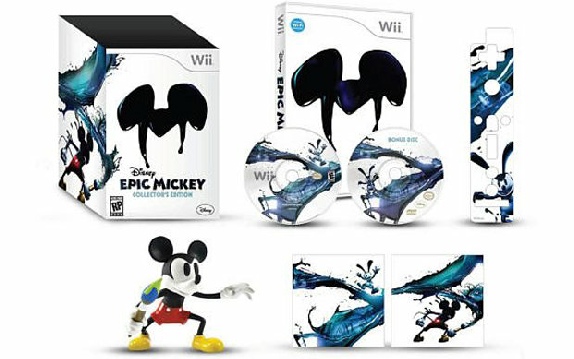 Now comes to the really fun and cool stuff in the collector's edition. The Collector's Bonus DVD, which contains 4 remastered Mickey Mouse classic cartoons. The Lonesome Ghosts, Clock Cleaners, Thru The Mirror, and The Whalers. These are 4 of the shorts that are predominately featured in the 2D levels of the game, when traveling from area to area. Also included on the disc is a lot of concept art for both characters and scenery of the game. The biggest part of the disc in the inclusion of is the Featurettes section. This is a multi-part video with a running time of roughly 33 minutes total of behind-the-scenes and history of Oswald, Junction Point Studios, and Epic Mickey. This is a must have for Disney gamers like myself. I popped this DVD as soon as I saw it and watched everything on the disc. There is also one last part of the DVD called Bonus Videos. This section includes a video of David Garibaldi, a performance painter, who has worked with Disney on a few occasions and creates some amazing art. In this video, which was filmed at E3 in June 2010, he creates a 8 foot painting of Mickey and the Dark Beauty Castle in under 10 minutes. The other 2 videos in the Bonus section are just trailers for the game it's self.

After hours of waiting, I promised my roommate that I would wait until he got home before I started playing, I finally got to pop the game in and revel in all it's epicness. I played through the first 2 levels, The Mad Doctor's Lab and It's A Small World/World of Gremlins, this game is definitely living up to it's title. The levels are fairly good length and are a dark approach to the Disneyland locations that we all know and love. There is no vocal dialogue except for Yen Sid in the beginning video, but that's ok as it makes it feel more like the original 1930s cartoons. The designers at Junction Point Studios, I believe are a group of people who “get it”. “It” being our love for Disney. Almost everything in this game is a direct reference to something from the history of the Walt Disney Co., a prime example is the money system being used in the Wastelands. They could have used Disney Dollars or something simple like that, but those chose to use the old tickets for currency. Throughout the game you will find E-Tickets everywhere and can be used to purchase Paint, Thinner, Health, and Pins.

Wait....Pins? Yup, you read right. They have even added pins into the game as a form of achievements. I am having a lot of fun collecting them. The best one so far is once you complete the It's A Small World Clock-tower boss you will receive the “Stop The Music” pin.

Now, no game is perfect, and Epic Mickey is no exception. I have 2 big complaints for the game. First off is the camera, it is one of the world camera AI and mechanics I have seen a very long time. The camera is controlled with the D-pad and you enter first person mode by hitting the 1 button. I have the hardest time with the camera when I am trying to use Paint or Thinner on a building or something that is high above Mickey. It also has a problem with locking in a certain position and giving you no ability to movement in certain areas of the game. This makes exploring and finding many hidden aspects of the game very hard and usually makes me do blind leaps into dangerous areas. The next complaint I have is the lack of saving. The only time the game will save your game is when you hit a checkpoint and the game does not make it very clear as to where these checkpoints are, other then when you go through the Projector Screens to go to a new area of the game.

I will have a more in-depth review of the game coming as soon as I have completed the game. There is so much to this game, I will definitely be having to do at least 2 play-throughs to see and collect everything.

So my initial thoughts of the game are this.....BUY IT! This is going to be a must have for any Disney fan and will hopefully help Mickey start his process into finding a spot in the gaming hall of fame along side Mario, Sonic, Link, and Sly Cooper.

Hush, I am a huge Sly Cooper Fan and he gets top billing too, lol.

Check out Adam Goswick's earlier "DizTech" column about Epic Mickey along with some early concept art.