"A Look Back at Disney’s QuackShot!"

Everything was better when we were kids. Movies were better, cartoons were better, but what about video games? Like many kids of my generations I was raised with video gaming. My love for both video games and Disney both started in the same year, 1988. It was a truly magical year for me. My father started working for Walt Disney World and for that Christmas Santa brought me a brand new NES, Nintendo Entertainment System and TV. I was so happy that I couldn’t wait for my parents to hook it up, but once that was done I had to face the toughest choice all kids in my position had.. What game do I play first? NES at the time came with a copy of Super Mario Bros. and Duck Hunt, but my parents got me another game to go along with it, Mickey Mousecapade. Okay, I played Mario first, but still it was a cute story while it lasted. The morale of the story is this... Video Games Rock! Let's take a look at where video games of my generation came from all their 8-bit and 16-bit glory so that we can see how far we truly have come in the gaming world. 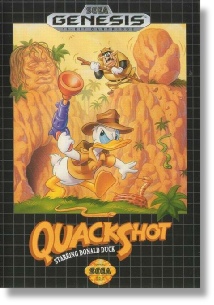 Now I'm not gonna talk about Mickey Mousecapade this time because well.… I can't find the game cartridge right now. Oh yeah to all you lil’ young gamers, we didn't have discs and digital games, we had big, square, plastic cartridges. Let's jump ahead a few years in the world of gaming to December, 19, 1991 and take a look at Quackshot Starring Donald Duck.

Surprising late in the holiday season to release a game starring one of the more familiar Disney characters, Quackshot was published and developed by Sega itself or more particularly a division of Sega called AM7. These were the developers who were known for giving us some of the more famous titles released on the genesis like, Phantasy Star, Shinobi, Golden Axe, and Streets of Rage.

Quackshot was released as part of a series of games based on Disney characters. Castle of Illusion Starring Mickey Mouse and World of Illusion Starring Mickey Mouse and Donald Duck were released a year before and after respectively. I honestly think they hit the nail on the head when it came to Quackshot. It had everything Donald was known for, his temper, his warmth towards friends and family, and his love of treasure.

While Uncle Scrooge naps, Donald Duck is flipping through some old books in the library.  Waaack! Out falls a strange piece of paper from one of the books. It's a long-lost message from King Garuzia, the old-time ruler of the Great Duck Kingdom. He's hidden his most prized possession somewhere on earth. And he's left a map that leads to its whereabouts!

"I could be rich! Richer than Uncle Scrooge," Donald thinks to himself. But Big Bad Pete and his Ducky Gang are lurking outside the window. They're about to snatch the map, but Donald dashes away, safe for the moment.

"Donald, you're late!," Daisy scolds. "But Daisy, something fabulous is waiting for me!" Donald squawks. "If I can find it, it will be a terrific surprise for you. I'll tell you all about it when I get back!"

If he comes back! Donald has no idea what dangers surround the hunt for the Great Duck Treasure. He only knows that he'll do anything to find it...

Quackshot has to be one of the best platformers I ever played on the Sega Genesis. It was not without it's down sides either. The first thing that I noticed as a kid was that Quackshot while not exactly an original story or concept did attempt to put a very Duckburg spin on what it was so obviously ripping off.....Indiana Jones. Even from the title screen you can tell something is a little when you see Donald Duck wearing a fedora and khaki shirt as well as the same font style as Indiana Jones. That's not where the similarities end either, from diaries with a map in it, the ancient knight, mine cart chases, and more. 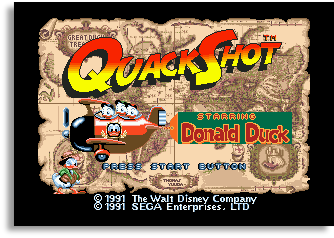 After looking past that the story and game play is a lot of fun. Equipped with a plunger gun and popcorn shooter, Donald makes his way around the world searching for clues to the final resting place of the Great Duck Treasure. Along the way you will run into some of Donald's friends and family who will help him in his search. Gyro Gearloose helps by giving you an upgrade to your gun that allows it to shoot bubble..gum?  Yes, bubblegum. I figured ok maybe you shoot enemies and it prevents them from moving or something but nope.... You use it to clear away walls and kill ghosts. Just goes to prove rule number 1 with video games. Leave logic at the door. Most gamers learned this after sitting down to ponder the logistics of the Super Mario Bros. game. Go ahead and ponder that one for a few minutes, it's ok I'll wait while you think about an Italian plumber in a world called the Mushroom Kingdom searching for a princess who was kidnapped by a dragon/dinosaur creature while being attacked by flying turtles and piranha plants.

Ok now that's sunk in lets get back to Donald Duck.  With Huey, Dewey and Louie piloting you around, and yes you will be doing a lot of flying back and forth between locations to solve puzzles on how to advance to the next area of each location. This will get annoying at times because you will find the next key item in the most random of places like a Sphynx Tear.

Let's play a game; Where in the world would you expect to find the Sphinx Tear?

The correct answer is A. Maharajah, which actually makes no sense because Maharajah is a person not a place but yeah... These are the kind of things that throw you for a bit of a loop while progressing.

What is a game without music, with some games we got very recognizable theme songs, Sonic, Mario, Zelda, Castlevania. Quackshot has what I would consider mid level music. It's music isn't as easily recognizable as other games, but they were irritatingly bad songs either, the developers actually put thought into them, instead of using extremely repetitively 5 note loops like many other games of the 8 and 16 bit era.

As a 2-D side scroller the graphics were really good with detailed backgrounds and simple yet well done foregrounds, almost on par with Sonic the Hedgehog and many of the other more popular titles. I honestly can't complain about this game. Even with the Indiana Jones material rip-off it was an extremely fun game. If you have a genesis, dust it off and play this game, it will be totally worth your time.