"MotionBeam: Taking User Interaction To The Next Level."

Disney Research Pittsburgh and the Computational Design Lab at CMU have come up with a mash-up of devices that allows you to interact with digital projections. The new technology is called MotionBeam, and we’re about to dive in. 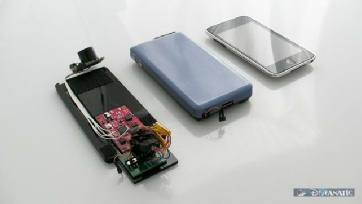 I mentioned that at the moment MotionBeam is a mash-up of other devices. Those three devices are a motion sensing device, a handheld projector (or pico projector), and an iPod Touch. Obviously, the motion sensor detects the user’s movements and the projector shoots the images onto the wall. The iPod Touch is basically the brains of the bunch, handling all of the processing and games.

MotionBeam is still in its very early stages. Don’t think you’re getting a polished, shiny, sleek new device in a plastic casing. It’s basically the three devices I mentioned above joined together. The iPod Touch sits on top of the pico projector, which is mounted to the motion sensor.

The motion sensor unit seems to have a number of different capabilities. First, it contains an accelerometer, gyroscope, and magnetometer board for motion sensing and orientation detecting purposes. It also has an ultrasonic distance sensor so it “knows” how far away it is from objects (say, a wall). Finally, it contains an infrared receiver it can use to interact with other objects.

I find it interesting that Disney Research deems it necessary to have a separate motion sensor. The iPod Touch is already capable of detecting motion. I’m sure Disney is aware of this, but I’m curious why it’s needed. It just seems like one of these parts could be eliminated.

What It Can Do

The current demos of the MotionBeam project focus on gaming and augmented reality (don’t worry about that term yet, we’ll get there in a second). Disney has plans for MotionBeam that go well beyond those ideas, though.

The gaming demos are relatively simple. One is a game in which a character goes about collecting stars. The player steers the character by moving the MotionBeam device. The second is a racing game where the vehicle is steered in the same fashion. Check out the video to get a better idea of how the games are controlled. 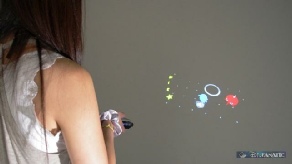 In the video, you'll see two examples of this. The first is a character that is able to bounce on a trampoline that is painted on a wall. The second is a car projected from MotionBeam that drives along the top of picture frames hanging on t 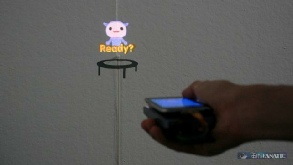 he wall. When it gets to the last picture frame, the frame sort of topples over.

Obviously, the characters themselves are only projections and are unable to actually interact with real-world objects. The objects in the video react by communication between a trigger on the object and the infrared receiver built into the motion sensor board.

We’ve talked a lot about the possibilities this idea has in the gaming front. It’s definitely an interesting device in that regard. I would be very interested in trying out a handheld projection gaming system.

But the possibilities don’t stop at gaming. Disney mentioned that this theory has possibilities in the business world. I have to agree. Imagine that you’re presenting a new model you’ve created, and you can use MotionBeam to project your model on the wall of the presentation room. You can also rotate the model, showing off different angles of your work just by moving your wrist. Perhaps you have a chart to show off, and MotionBeam allows you to manipulate the chart. There truly are a lot of possibilities in business.

As long as we’re in blue sky mode here, let me toss out an idea. What if MotionBeam could be used in conjunction with Next Gen technologies at Disney Parks? Think about it – MotionBeam is already equipped to interact with real world items. What if Disney incorporated these items into their theme parks? That way, if you purchased a MotionBeam device, you’d be able to unlock exclusive magical moments to which Guests without MotionBeam would be oblivious. It would almost be like the Kim Possible World Showcase Adventure, except throughout the park.

My last concern is actually the display, especially as it relates to gaming. In the video, we can see that the image rotates with the device. For the games that Disney showed, this seems to work. If this device does hit the market as a gaming device, though, there will have to be popular games for it. I have a hard time seeing this work with games like shooters, or even sports games. For these types of games, I would want the screen to stay stationary, and it seems like it would be uncomfortable to play. 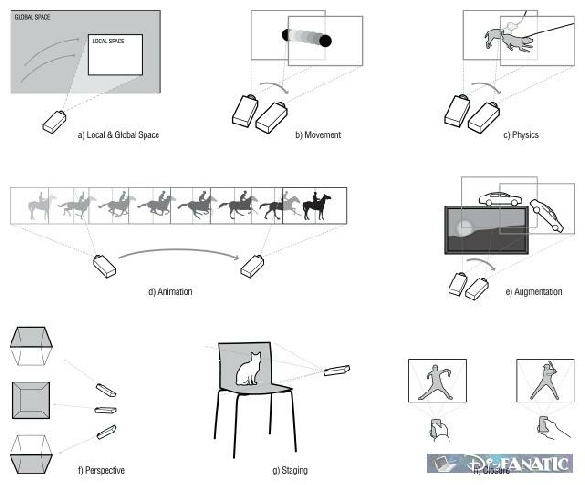 Overall, I think there are great possibilities here. I’m always excited to see what comes out of Disney Research. They seem to consistently come up with intriguing ideas, and MotionBeam is no exception. I know this is only a concept at this point, and only time will tell if this goes anywhere beyond the labs.

Keep your browsers pointed to DizFanatic.com for any further updates on MotionBeam!

What do you think this technology could be used for?