Was your last birthday cake boring, maybe adorned with just a few stationary flowers or balloons? Did you wish those balloons floated around on the surface of the cake? The last time you bought a fresh loaf of bread, did it interact with you when you sliced it into pieces? Do you long for a cookie that plays movie clips before you take a bite? Am I crazy for asking these questions? 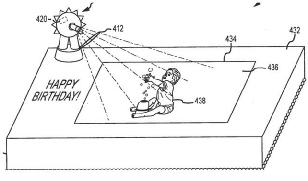 The only one you may have answered yes to was the last one, but Disney would disagree with you. Apparently, the lack of interactive confections is a problem that Disney feels should be solved. That’s why they applied for a patent for “projector systems and methods for producing digitally augmented, interactive cakes and other food products.”

The basic gist of this idea is just how it sounds: this technology would utilize some form of projector to create an interactive image on a food surface. We’re not talking the bakery equivalent of a movie theater projector on a flat screen, though.

If Cake Boss has taught the world anything, it’s that not all cakes are created equal. The surface of a cake can take on just about any shape or size, and Disney’s patent accounts for that. The projectors would utilize some sort of depth perception technology to tell it how far away different parts of the cake are. The result? The projection would be appropriate depending upon where it falls on the cake.

What does that mean? Let’s say you make a cake, and you want the surface of that cake to feature some beautiful outdoor scenery. You painstakingly create everything, including a riverbank, but you’re not satisfied with just blue icing for your river. You want it to ebb and flow, even over your uneven terrain. Disney’s projection system can detect the subtle changes in elevation so your river can flow as natural as possible for a cake creation. 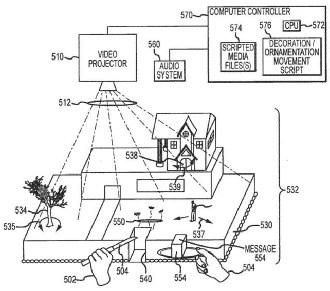 It also means that the path of the river can change depending upon what happens with the cake. Let’s say you cut a piece of cake, and the cut goes into part of the riverbank. The water, no longer contained by its banks, can now “flow” onto other parts of the cake – all because the projector can detect when you change or remove parts of the cake.

The other thing the projector can detect is when you interact with the cake. Disney’s patent includes a part the call a “wand” that allows you to interact with your dessert and change it to your heart’s content. Do you think there should be some flowers along that river? A wave of your wand can make it happen. Once again, the depth perception capabilities of the projector allow it to see where you move the wand.

Disney mentions more than just interactive cakes. A few of the other possibilities they explore are cookies, loaves of bread, and other confections. I’m wondering why something like this has to be limited to food. Can’t this sort of projection system be used for other interactive activities? I don’t have any specifics in mind, I’m just not sure why this is solely focused on cakes.

Which leads me to some of my other thoughts on interactive cake projection. Overall, I think it’s an interesting idea. I don’t see the need for it, but sometimes there isn’t a need for innovation. It wasn’t necessary to figure out how to synchronize sound with motion in cartoons. It was done for entertainment, and I think this is done simply for enjoyment. I’m not saying this development will go down in history next to Steamboat Willie, but it’s still a fun invention.

My main questions or problems with this idea are really threefold. First, where exactly does Disney see these cakes appearing? Do they want you to be able to go to your local bakery and ordering a Disney interactive cake? If so, I’m sure you’ll have to be renting some serious equipment (which leads into problems two and three, more on that later). Do they want this to be something you can order when celebrating at select locations that already have projection equipment (say celebrating a birthday or wedding at a Disney Park)? I think I understand that idea a little better. A premier cake for a premier event (or dessert party, perhaps) isn’t such a bad idea.

Problem number two, as some of the pictures in the patent show, this will require some serious equipment. We’ve already talked about projection equipment, which doesn’t look small in most cases. Many of the pictures show a projector mounted on top of a metal rod that comes up from the base of the cake. Not exactly elegant by any means. One of the pictures, however, shows a small decoration on the cake that functions as a projector. It looks remarkably like a webcam mounted on the cake. I like that idea a lot better, but I can see how it might not be as effective as the big projector. 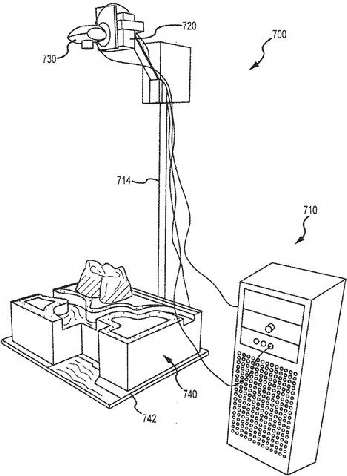 Some of the things this projection system can do aren’t simple. We’ve talked about the projection changing upon interaction and the projection basically knowing the properties of water. This sounds like it’s going to require some processing power. You may not only need a projector, but a computer as well. One of the pictures shows a cake underneath a projector mounted on a steel rod, which is in turn connected to the depth sensing machine (it looks like a computer tower, basically). That’s some serious equipment for Johnny’s birthday.

Finally, all of this stuff won’t be thrown in for the price of the cake. What will it cost to get my future child an interactive cake? I can’t even imagine. If my logic is sound, I think the small webcam-like projector might be able to project a simple image or movie – and it might be the more affordable route. A simple “Happy Birthday” message or a video of Mickey blowing out your candles shouldn’t be too hard to do. But what happens when I have to get a huge projector and depth sensing machine? Cakes aren’t very cheap to begin with. Have you priced a wedding cake recently? I have. I might be able to afford the interactive cookie!

I’d be interested to see this project as it gets nearer to a prototype stage. A lot of patents never really see the light of day, so hopefully we at least get to see it in action. Sometimes it’s hard to visualize what these ideas can really do, so maybe some of these points will be clarified in the future.

Either way, this whole idea begs one question: if you ever come across an interactive cake, will you be more eager to admire the technology involved or dig in and think about the innovation later?

You can view the patent in it's entirety HERE.