Guilty Party is Disney's latest attempt at creating new video games, and the results are very impressive. Guilty Party is best described as a mix between a classic Disney story and the board game/movie Clue. The title tells the story of the Dickens Detective Agency and its group of rag tag sleuths, both young and old. Mr. Valentine, the game's big bad villain, has kidnapped the Commodore's wife and it is now up to the sleuths to gather clues, find out the suspects and put Mr. Valentine behind bars once and for all. 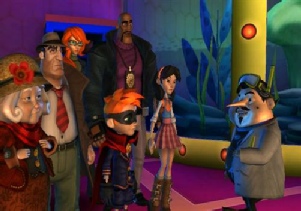 The game is a party game that allows up to four players, perfect for the whole family. Game play takes places in a series of boards where you investigate its rooms and talk to the suspects. Investigating a clue or talking to a suspect are presented as mini-game activities that use the Wii Remote in unique and fun ways. For example, you can dust off a clue by shaking the Wii Remote like a brush, you can pick a lock by twisting and turning the controller and if you are talking to a suspect you can bribe them, intimidate them and even organize their thoughts by pointing with the Wii Remote. These mini-games are very fun and easy to learn, preventing the investigations from becoming slow and stale.

Of course, Mr. Valentine won't make it easy for you. With every turn he will use trap cards that will make your investigation that much harder. Luckily, you can use cards of your own. Some of them will unlock doors, transport you to another location and even bring the suspects to you. Once you have gathered all of the clues you must analyze them, read all the vital information and once you have the basic characteristics you go to a suspect and confront them regarding the crime. The suspect will begin to ask you questions so you must show them the correct piece of them that will shatter their alibi. The game is won when the suspect gives up and confesses to the crime.

Players can either play co-operatively or competitive. This allows families with younger players to help each other out or players with a competitive thirst play Guilty Party however they want it. The main gameplay modes include story mode and party mode. In Party Mode, the cases will always be different, assuring that players will never experience the same case every time they play. The difficulty setting can also be changed according to the player. If a player is new to the game they can play in an easier difficulty setting while older players seeking a challenge can do so by selecting a higher difficulty setting. 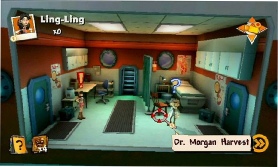 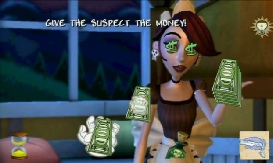 Guilty Party is a fun, engaging and quirky experience that both families and Disney fans shouldn't miss out on. With a silly story featuring some very fun characters, a very well designed gameplay system and many modes of plays, Guilty Party is one mystery that shouldn't go unsolved.

Disney Guilty Party is a fun and hilarious mystery party game, exclusively for Wii™ console. Friends and family play as the savvy sleuths of the world-famous Dickens Detective Agency to investigate a series of mysteries and identify the guilty party.

Explore a variety of mysterious locations - each with a unique twist. The Wii Remote is used to collect clues and interrogate suspects via fun pick-up-and-play minigames. With enough evidence gathered, players can identify the guilty party and crack the case.

• Play as an elite detective called in to investigate a bizarre series
of mysteries. Search the scenes for clues, question suspects
and utilize sleuthing skills to crack the case

• Play alone or with up to four people in head-to-head gameplay,
or team up in cooperative mode to solve the case

• The Wii Remote becomes a lock pick, a flashlight and more.
Quick wits and reflexes are needed in dozens of mini-games to
uncover clues and gather information from suspects

Pedro L. Hernandez Torres "The Disney Gamer"
Born and raised in Puerto Rico, Pedro has been a fan of the Disney animated films since he was a baby, and is an avid videogame fanatic. His dream is to be a professional writer and hopes to have his stories be turned into an animated film or a videogame. For now he is a staff writer and reviewer at Nintendo World Report, reviewers classic films for his personal blog Filmstrip Memories and is working hard on his Master's degree.

DizFanatic.com has NOT been compensated for this review.

Check out DizGamer for more great articles about Gaming with a Disney twist!

Stay tuned for more reviews coming soon. If there is a Disney related topic that you would like to see reviewed or covered on DizFanatic.com please contact us. We would love to hear what's on your mind!