"The Ins and Outs of Keychest"

Back in October, we started seeing details about Keychest. Original speculation was that we would be hearing lots more about Keychest in November, but that never materialized. Now, we’re still wondering what this whole thing is about and when we’ll know more.

In this month’s DizTech, I’ll try to shed some light on the whole Keychest thing and offer some speculation as to why we haven’t heard any more information on the subject. Keep in mind that none of this is hard news yet, because the only thing we know is that Disney is working on this (with some help – more on that later). 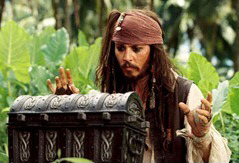 What is Keychest and Why Do We Need It?If you don’t know the theory behind Keychest, you may not care at all about any of this. What Disney is talking about, though, is very important and it could change the way you watch movies.

I’m sure you have a huge library of DVD (or Blu-Ray) movies at home. That library is great when you’re at home and ready to watch a movie, and it also serves you well if you want to take a few on a trip to watch on your laptop or personal DVD player. But do you also have an iPod, another type of media player, or a mobile phone with video capabilities? Wouldn’t it be nice to have your library of movies on those devices and not have to tote a bunch of discs around with you?

True, certain companies are releasing their DVDs bundled with digital copies of the movie that you can put on your computer and your media player. This is a great idea, but it’s still somewhat limited in scope. You’re still limited to a certain number of devices, and you also risk losing that media if your hardware fails (and you don’t keep backup copies).

All of this adds up to why we need a system that allows us to access our media from anywhere, on any device we want, whenever we want. Enter Keychest. Disney’s idea is that when consumers purchase media, they actually purchase a key to that media. If this confuses you, think of your last software purchase that required you to enter a long combination of letters and numbers. Both Microsoft software and anti-virus software are great examples. What you’re really paying for there is the license to use that software and that code represents your access to that software.

Keychest is more or less Disney’s attempt to bring this idea to the movie industry. Instead of paying to buy a movie on a disc as you do now, you’ll be paying to own access to the movie itself. In other words, when you buy a movie, a key (very much like the one you get with computer software) will be stored in a repository that can be accessed by other Keychest-enabled devices and services.

So, if you use Keychest to buy a movie to watch at home (or a Keychest code is included with a DVD or Blu-Ray purchase), you can now access that movie from anywhere as long as you have a device that can use that Keychest code. It sounds like that device also has to access the Internet to use and verify that code, and (in most cases) to stream the movie. That’s right, you won’t be actually downloading a movie, you’ll be watching it very much like how you watch video on YouTube or Hulu. This would even work on most Blu-Ray players, which are connected to the Internet for features like live content.

Will It Work and What’s the Holdup?

Whether or not Keychest will take off depends on a lot of things. The first thing you have to take into consideration is its dependency on the Internet. I enjoy being able to watch movies without having to worry about dropping a connection or having to wait if the video needs to buffer. You’ll also need a serious amount of bandwidth if you want to take advantage of that 1080p HDTV you have.

This also touches on another hot topic in the tech world. Are you familiar with the concept of cloud computing? If not, cloud computing is basically the idea that we can use the Internet for our computing needs. With services like Google Docs, Facebook, and Twitter, it seems like most of what we produce can be done online. You can store all of your information in this web-based “cloud” so you can access it whether you’re at your home computer or not. The question becomes, however, what happens when you can’t get to the Internet?

That said, Disney has enlisted a big name to help them with Keychest: Apple. This alone makes Keychest something interesting to follow, because now you have a whole array of possibilities. What if iTunes can use Keychest to sync movies to your iPod? Would you be able to access your Keychest movies instantly with your iPhone? If Apple is indeed working on a tablet-like device, will that use Keychest to access movies? While Apple has its own shortcomings as a company, you can’t ignore the domination they have in media with the iPod brand.

You also can’t ignore the fact that this is still another attempt at digital rights management (DRM). If you’re not familiar with the term, DRM is basically the reason you can’t simply copy a DVD onto your computer or share movies you buy online through download services. While Keychest sounds like a much better approach to DRM, it still has some negative connotations to deal with.

DRM leads into the last thing I’m going to discuss: why Disney hasn’t said anything more about Keychest. Media companies like the fact that you can’t access your media from anywhere on any device. First of all, they are very afraid that their movies will be rampantly stolen if they’re not laced with copy protection. Secondly, this is a very lucrative business. If you have a DVD that you want on your iPod, the only technically legal way of doing so is buying the movie again through iTunes. Or what happens when a DVD gets scratched and ruined? Keychest could represent an end to this business of re-buying a movie I already own.

I doubt that Disney wants to enter into this venture on their own. I assume they’re working hard at getting other media companies to sign on as well, but how many of them are willing to drop the DRM model I talked about a second ago?

Here’s another theory that may be a little out there but still fun to visit. Since Apple is a part of this project and a lot of people believe they’re hard at work on a new device, is it possible that we’ll have a joint unveiling of Keychest on the new Apple device? It would effectively be a media extravaganza if Apple unveiled their new project that was fully capable of using Disney’s Keychest to stream movies directly to it. Just a thought.

I’ve been intrigued by Keychest since I heard about it over a month ago. It’s a fresh take on an old problem, and I’d welcome any attempt to solve that problem. Like any new idea, it has some questions and I’m sure it will meet some criticism. We’ll have to wait and see what happens when Disney decides to shed some light on the subject in their own good time. Stay tuned to DizFanatic.com and DisTECH.wordpress.com for more details!