A little over three years ago, I started a very random collection. This collection may not be the most useful or nicest collection I own, however I’ve had a lot of fun completing it thus far. What intrigued me about this collection was that each purchase was a mystery. Very much like the ever popular Vinylmations sold throughout the parks and Disney Stores today, three Disney miniature PVC figures were sold in sealed packages for $5 and were advertised for ages 4 and up. The packages were different colors for each “series” and each set consisted of 18 different PVC figures. Now if you are anything like me you might be asking yourself, “What does PVC stand for?” PVC literally means poly vinyl chloride, but in layman’s terms it’s a type of plastic, so these are small plastic figures. Some series were themed consisting of Star Wars related figures, Pixar characters, or Pirates of the Caribbean characters, while other series contained a variety of Disney characters, theme park attractions, vehicles, and park icons from both the Walt Disney World Resort and Disneyland (i.e. Animal Kingdom’s Tree of Life or Disney California Adventure Mountain). There was also a Holiday series of PVC figures consisting of different characters dressed for each holiday such as New Year’s Eve Mickey, Thanksgiving Eeyore, and Halloween Stitch. 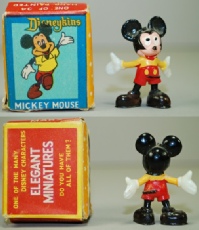 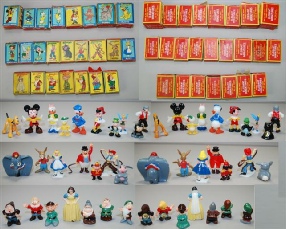 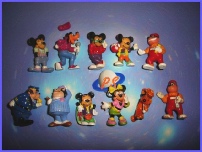 The most fun part of collecting each series was trying to complete them. Each time you purchased a package you had no idea which PVC figures would be inside. This created an addiction for me. I didn’t necessarily collect these figures because I thought they were of the greatest quality and worth displaying, it was more that I found it exciting to open each package in hopes of finding Snow White, the Tower of Terror, or whichever figure I was in need of. Although it felt like Christmas each time I found a new PVC figure I needed, it ended up costing a lot to complete each series. I also ended up having a multitude of duplicates while searching for the figures necessary to complete each series. I wish this particular collection were more popular, as you could then add in the trading aspect. I found one friend that was also interested in collecting the PVC figures and we would trade each other our duplicates. Completing series would be a lot easier if they had different places around the parks to trade as they do with pins and Vinylmations.

I currently own and have the complete series of figures from Park Series 1-8, which includes the first Star Wars series, and the Pirates of the Caribbean series. This totals a whopping 144 PVC figures in my collection. These packages were in abundance throughout the parks and the NYC Disney Store from 2008-2009 and then they disappeared. Over the last year, however, they seemed to have popped back into existence as I’ve noticed that Disney has since come out with another Star Wars series (Park Series 9) and another series consisting of random park icons, attractions and characters including the Muppets (Park Series 10). I do not have these series and have been willing myself to save the money and keep it that way. We will see how long that lasts though. 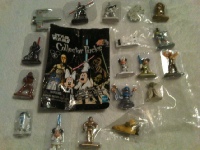 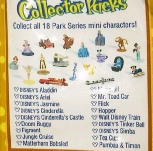 After hearing I have 144 miniature PVC figures, one may ask how I store all them. A year after I started collecting these figures, Disney created a “Collector Packs Collector Book,” which sold for around $10. This book had nine windows on each side of the book totaling 18 windows. The cardboard siding of the book would lift up and you could place your figures in a foam enclosure with a clear plastic window for safekeeping. You could either display one figure per slot or you could have a few figures in each window. Each book had a magnetic closure to keep it shut while not in use. Although I do not feel that this is the best way to display the figures, I have yet to come up with a better way. I have thought of creating a glass case that I could put the PVC figures in so they could be seen without having to open up boxes, but it seems like a lot of work for a bunch of one-inch figures. Anyone have any insight? Does anyone else collect the Disney Park Series collector packs?

Needless to say, although this collection is plentiful in my house, I have come to the conclusion that it may be one of the silliest collections I have owned to date. Besides the addicting element of mystery packaging, I think another appeal to me was that when I was younger I would collect various Disney PVC figures and play with them while in the bath as part of my “bath time bucket.” I had Ariel, and the Rescuers, and Aladdin and Jasmine on their magic carpet, and I would create intricate stories wrapped around my PVC characters. Just as Ernie from Sesame Street would say, “they made bath time lots of fun!” I think this element of nostalgia definitely added to the appeal. 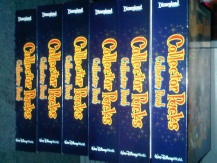 This leaves my final question for you: Why do you collect what you collect? Does it remind you of something you grew up with? Is it because you love a particular movie or character? Or do you merely collect something because it’s unique and different?

Stay tuned for another Magical Collections column next month. If there is a Collectable, or any other Disney related topic that you would like to see covered on DizFanatic.com please contact us. We would love to hear what's on your mind!