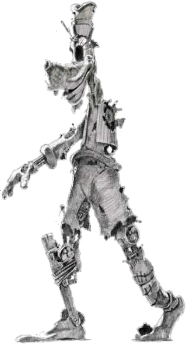 Mickey Mouse has already had a few triumphant returns to the consciousness of the general public. In 1983, for example, he returned in Mickey's Christmas Carol after a 30 year absence from film. Seven years later, Mickey starred in The Prince and the Pauper, and 1995's Runaway Brain was nominated for an Academy Award. While he's appeared in other roles since then (with cameos in a few films and appearances in games like the Kingdom Hearts series), it's been a while since Mickey's had a lot of hype.

Well, Disney Interactive Studios and Junction Point Studios are bringing Mickey back in epic style. While Mickey won't be returning to the silver screen, he will be coming to your screen. Epic Mickey, a game exclusive to the Nintendo Wii, features a retro style Mickey returning to battle a mix of old and new enemies. Let's take a look at what we know so far about Epic Mickey and maybe do some dreaming about what the game could be.

Savvy Internet users dug up concept art of the game long before we knew it was officially on its way. Some of the first leaked images and details appeared earlier this summer. While this was still rumor and speculation, it certainly got some communities buzzing about a potential Mickey Mouse video game.

But it was still just that - rumor and speculation. As it goes with rumors, some went a little crazy. Game Informer says that some even thought the big news was that they were bought by Disney! Many people, though, seemed to piece together the clues and figure out that Disney was planning on bringing Mickey Mouse back in a new video game.

When Game Informer revealed their November issue, the speculation was over. Interestingly enough, Disney Interactive Studios didn't officially unveil the project until October 28 - almost a month after Game Informer unveiled it!

What We Know About Epic Mickey

Before I get too deeply into this, let's get the important stuff out of the way. The game will only be available for the Nintendo Wii, and it'll appear next fall. I've seen some early guesses that it will be available in October or November, but all official news has only said fall 2010. New Wii games usually retail for $49.99, so you can expect the game to set you back about that much.

Now that the important stuff is out of the way, we can move on to the fun stuff! As it should be with any Disney production, Epic Mickey features an intriguing story. Walt Disney's first cartoon creation, Oswald the Lucky Rabbit, is increasingly discontent with Mickey Mouse's rise to stardom. Oswald now lives in the Cartoon Wasteland, a world created by Yen Sid (the sorcerer from The Sorcerer's Apprentice) for retired Disney characters. Mickey stumbles upon the Cartoon Wasteland, and this is where the game takes off.

Mickey is equipped with a special paintbrush that is able to change the game's environment and interact with other characters. You will even be able to create and change pathways to make your own way around a level. Players will control the paintbrush with the Wii Remote.

This isn't the only level of interactivity Epic Mickey offers. Mickey himself is completely interactive. Players will be able to make their own decisions in the game, and these decisions will alter the game's outcome. Mickey doesn't have to be the happy-go-lucky hero he became in later cartoons, either. If you want Mickey to be the mischievous little guy he was in early cartoons, that's completely up to you. But the choices you make will also affect how other characters interact with you. Perhaps Donald will be a little more friendly with you if you show some temper, also. 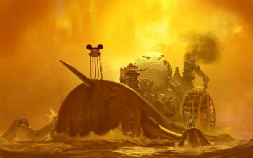 Epic Mickey is being produced by Junction Studios, which is headed by Warren Spector, famous for other video games like the Wing Commander series. When Disney originally approached Spector about creating a Mickey game, Spector wasn't interested. He thought Mickey had lost his edge.

Disney, though, allowed Spector to create a new image for their corporate icon. This idea caught his attention, and he decided to sign on to the project. Spector and his studio decided to give Mickey a 1930s look. Spector is very aware of how Mickey's attitude has changed through his career, and it seems this 1930s version of Mickey is exactly what they're going for.

Spector and his team are doing some wonderful things with the game so far. In the spirit of imagination, something every Disney fan can appreciate, Junction Studios is creating a very interesting product. You'll recognize elements from nearly every aspect of Disney, from the parks to the films.
Some concept art and screenshots we've seen so far have featured some beautifully imaginative enemies and, well, contraptions. For example, early art showed vehicles created from the famous tea cup ride at Disney Parks, with a face of one of the seven dwarfs on each.

There's also the Beetleworx, which looks like a combination of Mickey's car with Hades's head sticking out of the front and laser cannons from Lilo & Stitch attached to the sides. Mickey will be able to use his paint brush to take care of most of these enemies, but it sounds like the Beetleworx will be a little harder to finish off.

Epic Mickey sounds like an exciting new game. It'll be great to see Mickey back in action, and it will be interesting to see how people embrace this Mickey of yore. I think most of the general public doesn't know what Mickey was like in those early cartoons - certainly not the quiet hero he has become. Spector said that this title will be edgy, and I wonder how people will receive that.

We still have about a year to wait until we get the answer to that, though. It seems like a long time, but there will be some exciting developments along the way. You know, just enough to keep us hyped up! So stay tuned to DizFanatic.com and distech.wordpress.com, because we'll be there following this game until release day!

See the new DizGamer column for some new and exciting Epic Mickey information and screen shots!