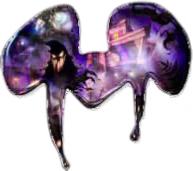 Video Games. What do you think of when you think of gaming? Mario? Link? Master Chief? Sonic? I bet you it's not Mickey. That is exactly what Disney Interactive Media Group and Junction Point Studios wants to change with their new holiday release of 2010, Epic Mickey, and from what we have been shown so far it is just that. Epic.

Epic Mickey follows the story of the mouse himself as he falls through a mirror in his living room into the castle of the Sorcerer, Yen Sid. After Yen Sid leaves Mickey alone, Mickey stumble on a model of a town called The Wastelands, an alternate world made up of Disney's forgotten creative efforts. Mickey inadvertently plays with the magics and creates a monster and flees back to his home. Some time into Mickey's future he is sucked into The Wastelands and begins your and his adventure. You are given the power to wield paint and paint thinner to change the world around Mickey in order to help him become an epic hero.

The Wastelands are torn apart by the Phantom Blot as he joins forces with the world's ruler, Oswald the Lucky Rabbit. Oswald is jealous of his half-brother, Mickey, and the success he has endured all this time. The Blot creates deformed mechanical versions of Mickey's friends and world for Oswald as they try to steal Mickey's heart. No one in the world of The Wastelands has a heart and Mickey's is the most powerful of anyone and will help them to escape The Wastelands and into Mickey's world.

Epic Mickey is being released as a Nintendo Wii exclusive and utilizes the Wii remote as much as any game released to date. The game also utilizes the concept of "Playstyle Matters", an innovative gameplay created by Junction Point Studios, where players creatively tackle different challenges in the world to explore all the possibilities and storylines. However, all choices will have consequences, either good or bad, depending on how Mickey interacts with his environment and the characters within.

The main parts of the game are going to be a 3D world and gameplay, but traveling between these worlds will involve levels of 2D platforming inspired by animated films and shorts. The action we have been shown so far has been so exciting. The first level we are introduced to is the 3D area of Ventureland where you will interact with characters and take on quests. The 2nd area we were introduced to was one of the 2D platforming levels based on the Steamboat Willy cartoon.

We are also getting some fun side quests to do from finding hidden collectibles to being able to collect 75 hidden virtual pins. No talks of there being vinylmations in the game as collectibles, but who knows, more news is yet to come on this exciting new spin on the Disney parks and cartoons. I will be keeping my Eyes and Ears (pun intended) open for more information and will be delivering it to you as soon I know about it.

I also want to congratulate the Vantage Point group for, among many other awards, winning both Best Wii Game and Best Platformer at E3 by http://www.IGN.com. They were also nominated for Best Overall game but lost to FPS and Racing game, Rage, from id Software.

Until next time, I am your DizGamer saying keep those controllers charged because we have an amazing year of gaming coming your way.  Armand "DizGamer" Usagi.

Check out Adam Goswick's earlier "DizTech" column about Epic Mickey along with some early concept art.